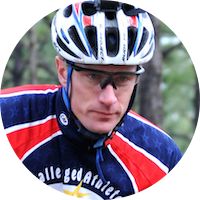 Lieutenant Colonel Kent Solheim has served in the United States Army for more than 23 years and has deployed eight times in support of operations in Iraq, Afghanistan, and on the continent of Africa.  Solheim was wounded in July 2007 in Iraq when he sustained three gunshot wounds to his legs and one gunshot wound to his left shoulder.  He lost his right leg as a result of his injuries.

Solheim began competitive road cycling when he was 16 years old.  He raced for seven years, first as a Junior and then as a Category 1/2 cyclist.  Among his many accomplishments are placing 4th in the Ontario (Canada) Junior Summer Games Team Time Trial, winning a Regional Cycling Championship, placing 5th in the Ontario Category II Provincial Road Racing Championships and competing in the 1992 Cycling Olympic Trials.

After joining the Army, Solheim began running competitively and was selected to compete on the Fort Hood/III Corps 10-mile running team.  Over the next four years, he competed in a number of distance races ranging from 5km to a full marathon.  Solheim also began competing in triathlons and adventure racing, winning the 8th Army Triathlon and numerous top three finishes in adventure races.  He earned a spot on the 8th Army Ruck March Team, placing 2nd in the heavy division of the 2001 Bataan Death March.

Following his injury, Solheim returned to athletic competition to help in his recovery.  He competed in sprint and Olympic distance triathlons, winning a Regional XTERRA Paratriathlete title, placing second in the 2011 New York City Paratriathlete open division category (3rd best time in the Below the Knee Amputee National Division) and qualifying for the Paratriathlete World Championships.  He also earned a top three finishing time in his age group, competing against able-bodied competitors.