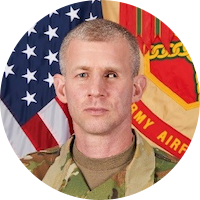 Lieutenant Colonel Ken Dwyer graduated from Furman University with a degree in Health and Exercise Science in 1998 and received his commission into the U.S. Army as an Infantry officer.  While stationed in Ft. Campbell, KY LTC Dwyer served as a rifle platoon leader, mortar platoon leader, and Company Executive Officer with the 2nd Battalion, 187th Infantry Regiment, 101st Airborne Division.

On his third combat tour to Afghanistan in 2006, LTC Dwyer was injured by a Rocket Propelled Grenade resulting in the amputation of his left hand, removal of his left eye and other shrapnel injuries to his face, neck, torso and right arm.

In 2008, LTC Dwyer took command of Headquarters and Headquarters Company, 3rd SFG (A).  In June of 2011, LTC Dwyer completed his master’s degree in Defense Analysis at the Naval Post Graduate School (NPS) in Monterey, CA where his thesis work focused on a comparative analysis of the various treatment options for service members suffering from Post-Traumatic Stress Disorder.  Upon completion of his graduate studies, LTC Dwyer returned to Fort Bragg NC as the Chief of Readiness at the U.S. Army Special Forces Command.

In 2015, LTC Dwyer was assigned as the Executive Officer for the Special Warfare Training Group with a follow-on assignment as the G33, Chief of Current Operations at 1st Special Forces Command.   LTC Dwyer currently serves as the Garrison Commander of Hunter Army Airfield in savannah GA.

LTC Dwyer enjoys spending time with his wife and kids, playing golf, cheering on his favorite sports teams, and coaching youth athletics.  He has been married to his wife Jennie for 18 years and they have two children, Timothy, and Julia.