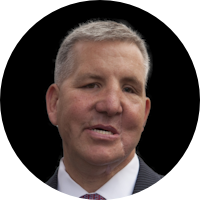 Lieutenant Colonel Justin Constantine joined the Marine Corps while in law school at the University of Denver School of Law and served as a JAG officer for six years.  As a Reservist, Constantine deployed to Iraq in 2006 as a Civil Affairs Team Leader attached to an infantry battalion.  During a combat patrol, Constantine was shot in the head by a sniper.

The original prognosis was that he had been killed in action.  Thanks to risks taken by fellow Marines and a courageous Navy Corpsman, Constantine survived.  For his service in Iraq, he earned the Purple Heart, Combat Action Ribbon and Navy-Marine Corps Commendation Medal. As a result of his injuries, Constantine cannot see out of his left eye, is missing most of his teeth and the end of his tongue and cannot speak perfectly clear.  He cannot run because doctors removed bones from his legs to use in reconstructing his upper and lower jaws.  Constantine also suffers from Post-Traumatic Stress (PTS) and a Traumatic Brain Injury (TBI).

Constantine’s spouse and caregiver has been the cornerstone of his recovery.  Just dating when Constantine was injured, Dahlia dropped out of her PhD program at Cambridge University in England to be with him in the hospital and helped him in every step of his recovery. Constantine proposed to Dahlia a year after his injury, and they were married the following year.

Constantine is retired from the Marine Corps.  After practicing law for 15 years with the Federal Government, including positions at the Departments of Justice and Homeland Security and the FBI, he is now an inspirational speaker and veteran advocate.  Constantine served as a Senior Advisor with the U.S. Chamber of Commerce Foundation’s Hiring Our Heroes program for three years, and now is an independent consultant for a number of veteran employment initiatives.

In 2015, he completed his first book, My Battlefield, Your Office, which applies military leadership skills to the private sector. In partnership with the Society for Human Resource Management (SHRM), Constantine published a second book about veteran employment.  His writing on military and leadership issues has been featured in such outlets as CNN, Time, the Washington Post, The Atlantic, Forbes magazine, USA Today and Stars and Stripes.

Constantine now serves on the board of directors of the Wounded Warrior Project, and a number of other national nonprofit organizations.  He co-founded his own nonprofit organization in 2015, which focused on veteran and military spouse networking opportunities.  He is an Ambassador for several organizations, and a member of First Data’s Military Advisory Council.

Constantine was the Honor Graduate of his class at the Marine Corps Command and Staff College.  In 2015, he graduated on the Bissey’s List from Georgetown University with a Master of Laws degree focusing on National Security.  In 2012, the Virginia Legislature passed a resolution highlighting Constantine’s continued support of veterans and other wounded warriors.  Constantine is a Presidential Leadership Scholar, has been named a Champion of Change by the White House, and also was awarded the prestigious inaugural 2014 Lincoln Award recognizing his outstanding achievement and excellence in providing opportunities and support to our nation’s veterans and military families.  In 2017, he received the Henry Viscardi Achievement Award for shaping attitudes, raising awareness and improving the quality of life for people with disabilities.

Being a member of Team 43 has helped significantly in Constantine’s recovery.  Playing in the Bush Institute’s Warrior Open has been a great experience, and introduced Constantine to many different people at various Team 43 events who were there in support of the warriors.  This reminds him of how much the people of America care about our wounded warriors, and what a priority our recoveries are for President Bush.  Introducing President Bush at the Bush Center’s 2014 Veterans’ Symposium was a true honor and Constantine’s favorite speaking event.