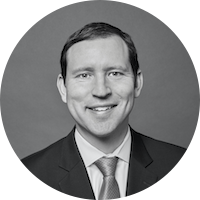 Henry Hager is the Managing Director at Waterous Energy Fund.  Before joining Waterous Energy Fund, Henry was a Director with Kohlberg Kravis Roberts, where he spent six years, with a particular focus on energy and infrastructure. Prior to joining KKR, he was with Constellation Energy in its corporate strategy and development group.

Henry Hager began his professional career as Staff Assistant to the Senior Advisor at the White House to President George W. Bush from 2001-2003. During the Bush-Cheney Presidential Campaign '04, he served as Deputy Operations Manager.  Hager held positions in the U.S. Department of Commerce, working directly with Secretary Carlos Gutierrez from 2005-2006.

Henry holds an M.B.A. from the Darden School of Business at the University of Virginia and a B.S. from Wake Forest University.  Since 2012, he has been an active board member of the Coastal Conservation Association's Building Conservation Trust.  He resides in New York City with his wife, two daughters, and a son.