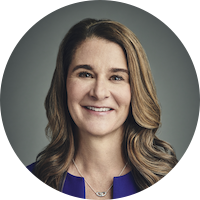 Along with Bill, she shapes and approves the foundation’s strategies, reviews results, and sets the overall direction of the organization. Together, they meet with grantees and partners to further the foundation’s goal of improving equity in the United States and around the world.

Through her work at the foundation over the last fifteen years, Melinda has seen first-hand that empowering women and girls can bring transformational improvements in the health and prosperity of families, communities and societies. In 2012, Melinda spearheaded the London Summit on Family Planning, which adopted the goal of delivering contraceptives to an additional 120 million women in developing countries by 2020. Her work has led her to increasingly focus on gender equity as a path to meaningful change.

The second of four children, Melinda grew up in Dallas, Texas. She received a bachelor’s degree in computer science and economics from Duke University in 1986 and a master’s in business administration from the Fuqua School of Business in 1987.

After joining Microsoft Corp. that year, she distinguished herself as a leader in the development of multimedia products and was later appointed Microsoft’s General Manager of Information Products. In 1996, Melinda left Microsoft to focus on her philanthropic work and family.

Melinda lives with her husband and three children in Seattle, Washington.