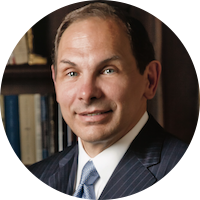 Robert A. McDonald is the April and Jay Graham Fellow at the George W. Bush Institute where he serves as a key member of the Institute’s Military Service Initiative team. In this role he is responsible for advocating for post-9/11 veterans and building awareness for the issues that affect their successful transitions to civilian life including employment, education, and health and wellbeing.

Mr. McDonald served Procter & Gamble(P&G) for 33 years with the last four as Chairman, President and Chief Executive Officer. During his tenure as CEO of P&G, he helped to expand the footprint of the company brands such that one billion people became new customers of a company product.

Following his career at P&G, Mr. McDonald served as the United States Secretary of Veterans Affairs from 2014-2017. While at the helm of the VA, he was able to help transform the agency into one that delivered better care for our military veterans.

Mr. McDonald is personally and professionally committed to values-based leadership and to improving the lives of others. He is Chairman of the Board of RallyPoint Networks, Inc.—an online community of active duty military members and Veterans—and serves on the Board of Directors of the Partnership for Public Service, Audia International, Inc., the Association of Graduates of the United States Military Academy, the Boulder Crest Retreat Foundation, Quotient, and the McCormick Research Institute in Orlando, Florida. Mr. McDonald and his wife, Diane, are the founders of The McDonald Conference for Leaders of Character at West Point—an annual gathering that brings together the brightest young minds from the best universities around the world and partners them with senior business, nongovernmental organization, and government leaders in a multi-day interactive learning experience.

Mr. McDonald graduated from the United States Military Academy at West Point in the top 2 percent of the Class of 1975. He served as the Brigade Adjutant for the Corps of Cadets and was recognized by The Royal Society for the Encouragement of Arts, Manufacturing, and Commerce as the most distinguished graduate in academics, leadership, and physical education. In 1978, McDonald earned his MBA from the University of Utah. An Army Veteran, he served with the 82nd Airborne Division. He completed Jungle, Arctic, and Desert Warfare training. And he earned the Ranger tab, the Expert Infantryman Badge, and Senior Parachutist wings. Upon leaving military service, then-Captain McDonald was awarded the Meritorious Service Medal.