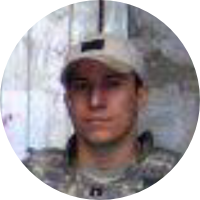 Major Christopher Cordova joined the U.S. Army in 1996 as a combat medic.  After serving 10 years as an enlisted Soldier, obtaining the rank of Sergeant First Class, he was commissioned in the Army Medical Specialist Corps as a Physician Assistant.

Cordova’s civilian education includes a Doctorate of Science in Clinical Orthopaedics from Baylor University.  He also earned Bachelor of Science and Master of Physician Assistant Studies Degrees from the University of Nebraska Medical Center.

Cordova is a strong believer in the power of exercise and fitness to overcome the psychological wounds of war.  He routinely participates in endurance athletic events to maintain physical and mental fitness.  He takes great pleasure in coordinating mountain bike rides for veterans in the community and introducing newcomers to the wonderful physical and mental benefits of the sport.

Cordova is married to a dedicated Army Spouse, Maria, and father to two lovely daughters, Kylee and Ella.