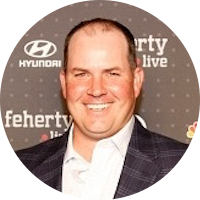 Corporal Chad Pfeifer enlisted in the United States Army as an Airborne Infantryman after playing college baseball at Northwest Nazarene University. He was assigned to 3/509 (ABN) Infantry Regiment at Ft. Richardson, Alaska. Pfeifer’s unit deployed to Iraq in support of Operation Iraqi Freedom in October 2006.

On April 12, 2007, Pfeifer’s patrol vehicle was struck by an Improvised Explosive Device (IED) which resulted in multiple injuries, including the loss of his left leg above the knee. He was sent to Brooke Army Medical Center at Ft. Sam Houston in San Antonio, TX where he spent the next 15 months completing physical therapy and rehabilitation. While there, Pfeifer picked up the game of golf and quickly became hooked on the sport. He spent most of his time on the course or on the range practicing and getting better at the sport which became his new passion.

Pfeifer was medically retired from the Army in 2008 and moved back to Boise, Idaho and married his wife, Summer. He and Summer moved to Phoenix, AZ and Chad enrolled in the Golf Academy of America. At first, Pfeifer played in few National Amputee Championships, then he started playing in tournaments.

In 2011, he was invited to play in President George W. Bush’s Warrior Open, a tournament which included severely injured service men and women. Pfeifer won the 2011 Warrior Open, and the following two years. That tournament opened up the door to many other great opportunities through the game of golf. Pfeifer feels one of the biggest opportunities he has had is the ability to use his story across the world to help inspire other wounded veterans and people with disabilities. In 2013, he turned professional and has used his story and the game of golf to help inspire others and get them started with the game of golf.

Pfeifer has participated in the American Century Championships, a celebrity tournament in Lake Tahoe. He has also played in the Diamond Resorts Invitational, a celebrity tournament in Orlando benefiting the Florida Children’s Hospital. Pfeifer has competed on Golf Channel’s Big Break, The Palm Beaches, Fl. in 2015 and most recently the new golf competition show Shotmakers, also on Golf Channel. He continues to use the sport of golf to help himself and others recover from life changing injuries and uses his story as motivation and inspiration for others.

Currently, Pfeifer is a brand ambassador for Diamond Resorts and works with the Feherty’s Troops First Foundation. Pfeifer and Summer have 3 little boys, Grady, Lucien, and Barrett. They recently moved back to Idaho to be near family.