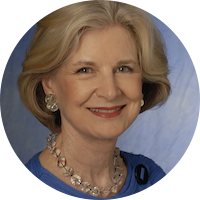 Caren Prothro is a resident of Dallas, Texas, where she is an active supporter of the arts, higher education, and programming addressing the needs of at-risk youth.  She is past Chairman of the Board of Trustees at Southern Methodist University and Co-Chairman of the “Campaign for the Second Century” with a historic goal of $1 billion supporting endowment and capital expansion.

She served as Vice Chairman of the Board of the Dallas Center for the Performing Arts from 2001-2010, now the AT&T Performing Arts Center.   She was the Chairman of the Development Committee, raising over $330 million towards the construction of the Winspear Opera House, the Wyly Theater, Sammons Park, and Strauss Artists’ Square.  She served from 2001-2008 on the President’s Committee on Arts and Humanities.

Her involvement in the establishment of Letot Center in 1990 was an outgrowth of her Junior League placement at the Dallas County Juvenile Department.  In 2009, she co-chaired the campaign to construct the new Letot Girls’ Center, a long-term counseling and residential center supporting victims of trafficking and abuse.

She has been the recipient of many awards, including the TACA Silver Cup Award, the Boys and Girls Club’s Robert H. Dedman Award for Philanthropy, the J. Erik Jonsson Ethics Award, the Linz Award, and the Southwestern Medical Foundation Charles Cameron Sprague Community Service Award.

She is a native of Wichita Falls, Texas and graduated from Mills College with a Bachelor of Arts degree.  Her late husband, Vin Prothro, was Chairman and CEO of Dallas Semiconductor Corporation.   She has a son, Vincent and daughter-in-law Dara Prothro and a daughter, Nita Clark, son-in-law Cullum, and three granddaughters, Lili, Annabel and Charlotte Clark.