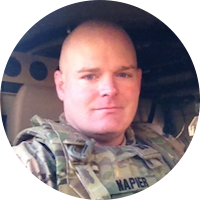 On Christmas Day 2006, while conducting a dismounted patrol near Taji, Iraq, CPT Napier and his platoon were hit by an Improvised Explosive Device (IED). The explosion killed his Iraqi interpreter, and also injured Adam and four Soldiers in his Platoon. CPT Napier suffered a Traumatic Brain Injury (TBI), including secondary shrapnel wounds to his hands, face, and shoulder. Shortly after on December 28, 2006, CPT Napier was again involved in a dismounted IED attack, in which his RTO was killed. CPT Napier suffered further TBI and shrapnel injuries in this attack. Later in the same deployment, CPT Napier suffered another TBI when his joint Iraqi and U.S. patrol base was attacked by a dual Vehicle Born Improvised Explosive Device (VBIED) attack.

Napier deployed many more times to multiple posts to prepare, advise, and train teams within the U.S. Military Service and Iraqi Army to combat the Global War on Terror and was deployed to Operation Enduring Freedom (OEF) 13-14 serving in RC-East as an advisor to the Afghan National Police and to the Operations Coordination Center Province-Parwan (OCCP-Parwan). After this deployment CPT Napier was selected to serve as the Operations Officer (S-3) for 2-4 Infantry as they completed their Combat Training Rotation (CTC) and prepared for deployment to Afghanistan and other NATO missions.

Since leaving military service in 2016, CPT Napier has developed experience with numerous veteran organizations. He has been proud member of President George W. Bush’s Team 43 and has been involved with the Veteran Golfers Association and is a graduate from the PGA Hope and Salute Military Golf Association programs focused on getting veterans involved in the game of golf.