Early marriage is a major problem for girls across PEPFAR countries, one which costs them many opportunities in life. When a girl in sub-Saharan Africa is married in her teenage years, usually to an older man and against her will, she is likely to become pregnant quickly and repeatedly, drop out of school with few marketable skills, and face an advanced risk of acquiring HIV.

To support the growth and health of young girls, PEPFAR and its partners have worked with local traditional leaders in many African countries to decrease child marriage in their communities. 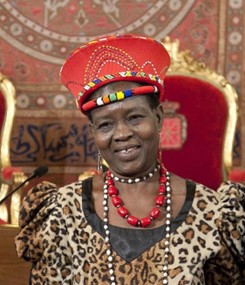 Senior Chief Theresa Kachindamoto is a fierce advocate for women and girls. When she rose to leadership in her home district of Dedza, Malawi, she faced one of the highest child marriage rates in the world. Recognizing the long-term negative impacts of child marriage for girls, Chief Kachindamoto has worked to ensure that young women in her area are not married before age 18. She also has been instrumental in annulling previous child marriages in the community and helping young women have the opportunity and support to return to school. She has taken her campaign beyond her district to others and to the national level in Malawi: She contributed to the passage of legislation in parliament in 2017 that set the minimum age of marriage at 18. Leaders like Chief Kachindamoto are critical to the long-term sustainability and success PEPFAR’s investments through DREAMS.