The Bush Institute is committed to presenting solutions to today’s pressing challenges, and that includes ongoing coverage and content that addresses the COVID-19 pandemic and response.

North America remains the most competitive region in the world. However, if we are to maintain our global lead, we must continue to work together to remove barriers to deeper integration and strengthen our economies as we rebound from the devastating impacts of COVID-19.

As governments, businesses, and think tanks review the efficiency and resiliency of North American supply chains—many impacted by COVID-19— The George W. Bush Institute-SMU Economic Growth Initiative’s Global Competitiveness Scorecard can be utilized as a tool for benchmarking and setting the next generation of aspirational goals for North American integration.

A starting point is to take a look at North America’s competitiveness, which shows a slight decline in the past ten years. This trend should be reversed for the region to continue leading globally. The graph below demonstrates how North America’s score on the Scorecard’s sub-indices has changed since 2009. 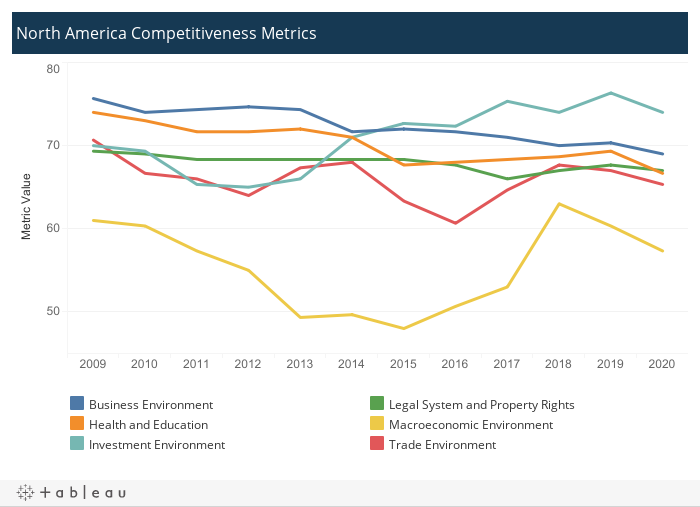 As the graph illustrates, North America’s decline in the business environment has been largely driven by regulatory impediments and rising costs of compliance—this score is calculated by the ease of starting a business, regulatory environment, infrastructure, and innovation. The U.S. score has declined over the past few years in part because regulations on hiring foreign labor have become more restrictive. Adopting a modern immigration system will strengthen the economic competitiveness of the United States, and North America.

Much of Mexico’s labor force is informal and those in the formal sector often lack access to digital technology. This results in Mexico scoring at the bottom third of the world on the “paying taxes” measure. COVID-19 has only heightened the need for Mexico and other Latin American countries to invest in digital infrastructure.

Additionally, the past ten years has seen a decline in infrastructure scores for Canada and the U.S. These measures point to the need for better mechanisms to coordinate, develop, and finance infrastructure projects across the continent.

The World Bank reports that the time and cost of border compliance has increased substantially in all three countries in the past ten years. In this same timeframe, North America’s average percentile rank on the World Bank “trading across borders” indicator has fallen 14%. The decline in the trade environment indicator signals the need for the three countries to invest more in border infrastructure, including digitization of border processes, and coordinated pre-screening programs at the borders. As the effects of the COVID-19 pandemic linger, these needs will only grow more urgent.

The macroeconomic environment has consistently been North America’s weakest sub-index on the Bush Institute-SMU Economic Growth Initiative Scorecard, due to high tax burdens and rising levels of government spending and debt across all three countries. However, North America’s score (57%) is in-line with other trade groups, including the European Union (50%), and the Trans-Pacific Partnership (62%). Macroeconomic environment is driven by factors such as fiscal health, macroeconomic and monetary stability, tax burden, and government spending.

The investment environment is North America’s highest score, and it signals the region’s success at attracting and protecting cross-border investment, in part due to agreements such as NAFTA and USMCA. To maintain its score, the region must continue to preserve the free movement of goods, services, capital, and labor, along with effective mechanisms to resolve investor disputes that may arise.

North America remains the most competitive region in the world. However, if we are to maintain our global lead, we must continue to work together to remove barriers to deeper integration and strengthen our economies as we rebound from the devastating impacts of COVID-19.