An Essay by Anne Wicks, the Ann Kimball Johnson Director of Education Reform at the Bush Institute

Education is a civil right and an agreed-upon investment by taxpayers for the future of our nation. But as the pandemic exacerbates challenges in school district, has trust been damaged permanently?

A district superintendent, a school board member, a teacher, and a concerned parent walk into a bar, arguing about COVID-19 protocols, year-end testing, and book lists. Who pays the tab? The kids.

For decades, American parents have sent their children dutifully down the street (or across town) to learn and grow under the care of professional educators in public schools. Today’s system of school districts — some with only a single campus and some with hundreds of them — developed over time as American citizens agreed to invest our tax dollars in schools as a public good. Put bluntly, public schools were a way to ensure that young Americans could, as adults, hold a job and read a ballot.

Today, our big lumbering public education system is both a marvel and an albatross. The idea of public education as a civil right, as an on-ramp to opportunity, is decidedly American in its boldness. But the execution of that idea has faltered under a lack of capacity and will, especially for our most vulnerable children – those living in poverty, those with special needs, and those who are English language learners.

The idea of public education as a civil right, as an on-ramp to opportunity, is decidedly American in its boldness. But the execution of that idea has faltered under a lack of capacity and will, especially for our most vulnerable children.

Significant gaps in academic outcomes for young people, typically by race and ethnicity, existed long before COVID-19 violently upended schools. Improvement happens, often locally or regionally, but systemic improvement is elusive. According to the 2019 National Assessment of Education Progress (NAEP), only 32% of American 8th graders were on track in reading. Tragically, Black students trailed white students by 27 points according to that measure; for Hispanic students that gap is 20 points.

The impact of the pandemic on American schools has ranged from disrupted to catastrophic. The reverberation of that impact for families has fractured the tacit agreement between Americans and their public school system. As responses to the pandemic varied widely by state and district, parents stepped forward to ask questions about everything from virus protocols to curriculum choices to bathroom policy. School choice has surged as families sought options beyond what their traditional public system was able or willing to provide.

Test data from the 2020-2021 school year in several states, including Texas and California,  shows that student learning has declined during the pandemic, painfully stretching those pre-pandemic gaps in performance. In the fall of 2021, the American Academy of Pediatrics (and others) declared that the decline in child and adolescent mental health is now a national emergency. Today’s system is not working well for many students, and we cannot pretend otherwise.

Is the great American public school experiment over? Can we ever rebuild trust in the public system?

Simply put, we can’t afford for the experiment to end. Public schools should evolve, absolutely. But if we are serious about sustaining and strengthening American democracy, then we need public schools serving American kids and families for years to come.

If we are serious about sustaining and strengthening American democracy, then we need public schools serving American kids and families for years to come.

In the fall of 2020, 48 million children enrolled in public K-12 schools. That means millions of families and thousands of communities rely on their local traditional public system today – and are likely to do so in the future. We absolutely need charters, private schools, and new emerging models of school, but they are unlikely to supplant the traditional system entirely.

This requires we rebuild the sense of purpose that inspired Americans to fund, with their own tax dollars, a system that served all kids, not just their own. And that means rebuilding trust. Doing so requires something of all of us – educators, parents, policymakers, and other stakeholders.

Ditch the sanctimony. Sanctimony inspires absolutely no one and enrages just about everyone.  Education Twitter timelines are riddled with righteous absolutisms and disdainful incredulity at opposing perspectives. Anyone who claims, with certitude, that they have all the answers should be ignored. The leaders we should listen to consistently do two things. First, they show their work, explaining the why and how behind their conclusions. Second, they show a willingness to adapt when better information comes to light. We expect this kind of thinking from students. Why should we exempt our leaders from the same?

The leaders we should listen to consistently do two things. First, they show their work, explaining the why and how behind their conclusions. Second, they show a willingness to adapt when better information comes to light.

We should seek the counsel of leaders like Tamara Albury,  principal of the Young Women’s Leadership Academy in Fort Worth. She helped her students and faculty navigate virtual and in-person learning with both high expectations and high warmth to keep her students on track. Academics like Emily Oster,  an economist, and Robin Lake,  an education researcher, each stepped forward with their teams to find and organize data to help policy makers and parents. Oster’s work on assessing risk is a boon to parents trying to navigate at times impossible decision making. Lake’s work organizes and compares district and state responses to the pandemic, allowing for a big-picture view over time as the pandemic has unfolded.

Tamara Albury, principal of the Young Women’s Leadership Academy in Fort Worth

Value proximity to the action. Or, said another way, fire the pundits shouting at you from all sides, telling you exactly who to blame and what to fear. Instead, listen to the voices proximate to the action, like parents, caretakers, and students. Listen to teachers, principals, and researchers. Sign up to be a substitute teacher or a bus driver. Volunteer for recess duty. Show up to the school board meeting.  Seeing the system up close builds understanding in a way that observing from the outside can never do. Combining context and expertise matters, now more than ever, to improve outcomes for children.

This looks like the parents who started the National Parents Union and Oakland Reach to better advocate for their own children – and for other people’s children. This looks like retired FBI executive and former U.S. Marine Michael Mason,  who unretired to drive a school bus amid the severe shortage in his Virginia community. It looks like the community members in Poudre, Colorado,  who signed up to be substitute teachers in January so that district schools could stay open for children.

Conflict and dissent are not to be feared — and rancor is not to be celebrated for its own sake. Educators and parents both have a right to know how and why decisions are made. They deserve to know if students are learning and on track. Parents are not ill-informed political activists, but they are responsible for their children’s education and development. Educators are not infallible experts who should never be questioned, but they are professionals worthy of respect. Transparency about outcomes and decision-making builds trust and respect. Obfuscation destroys it. Let’s show our collective work as we problem solve.

This institution, our bold public education system, deserves our attention, our commitment, our innovation, and, yes, our investment. We need traditional schools, charter schools, and new public school models to help America — and Americans thrive.

Educators are not infallible experts who should never be questioned, but they are professionals worthy of respect. Transparency about outcomes and decision-making builds trust and respect. 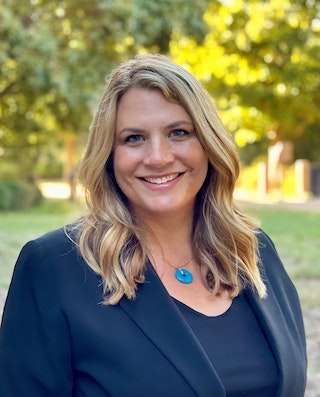