A new bipartisan policy rooted in compassionate conservatism aims to create opportunity in communities stuck in cyclical poverty. Through encouraging private investment, the initiative hopes to promote economic growth in low-income areas across the nation.

Senator Tim Scott speaks after voting on the Tax Cuts and Jobs Act in the U.S. Capitol in 2017. (Zach Gibson/Bloomberg via Getty Images)

What if I told you that compassionate conservatism, which many believed to be a dead idea long buried deep under the rubble of partisan bickering and polarization, never really disappeared? That it only went into hiding, remaining in the hearts and minds of those of us who believe in the importance of the flow of ideas in a free market and limited government.

This idea, a uniquely American ideal, is as relevant today as it was when then-Congressman Jack Kemp or President George W. Bush championed it decades ago. In fact, some of the most trying challenges our nation is facing today can be answered by looking within and allowing ourselves to be open to new ideas and streams of thought.

The relevance of compassionate conservatism

In the midst of tweet-storms, government shutdowns, and grand filibusters in the upper chamber, there has been a movement of compassionate-minded conservatives who have been working to win the hearts and minds of those who practice our principles in their daily lives — but fail to connect them to their own political ideology.

[T]here has been a movement of compassionate-minded conservatives who have been working to win the hearts and minds of those who practice our principles in their daily lives — but fail to connect them to their own political ideology.

Decades ago, I probably would have been right there with you questioning everything I just said. You see, I wasn’t cut from the same cloth as many of Washington’s more well-known characters. I don’t have an Ivy League education, never spent time studying abroad, wasn’t a Rhodes Scholar, and, in fact, I failed my freshman year of high school. When you fail English, civics, Spanish, and world geography, odds are you’ll never be a United States senator.

Thankfully, I was immensely blessed with a loving mother who never gave up on me, a mentor who in my teens recognized my entrepreneurial spirit, and, most importantly, a faith that guided my work. We lived with my grandparents in an old, cramped shack-style home off a dirt road in North Charleston, South Carolina, where Frances Scott, my mother, worked double shifts as a nurse’s assistant to put food on the table. I learned quickly that I had to think my way out of poverty if I had any semblance of a chance at paying my mother back for her tireless, selfless sacrifices.

I come from poverty and a single-family household, and my grandfather who left a segregated school in the third grade to pick cotton. The odds in life would say I shouldn’t be where I am today, but because these people saw in me great opportunity and potential, the least I can do is give it back — tenfold.

The odds in life would say I shouldn’t be where I am today, but because these people saw in me great opportunity and potential, the least I can do is give it back — tenfold.

My upbringing, challenges and all, has been my biggest motivation for the work I do in Washington every day. And without the guidance and mentorship of people who saw the God-given potential in me, I have no idea where I’d be today. My closest mentor, John Moniz, had a life mission statement he would base all his decision making on. He wanted to have a positive influence on a million people. My mission statement? To have that same influence on a billion people.

That’s why when I came to Congress, I knew that not only was I entrusted to represent the millions of people in my home state of South Carolina, but to fight on behalf of every young boy and girl in America who, like me, wasn’t sure if mom or dad could make ends meet. That’s why I’ve fought to level the playing field for those who have been overlooked for far too long.

Sen. Tim Scott meets with students at Newington Elementary in South Carolina in December 2018. (via @TimScott on Twitter)

A core tenet of any policy idea I study and work on has to be rooted in the premise that open societies, local communities, and people closer to their constituencies know better than any bureaucrat in Washington. As President Bush said, conservatives “believe in private markets humanized by compassionate government. We believe in economies that reward effort, communities that protect the weak, and the duty of nations to respect the dignity and the rights of all.”

A core tenet of any policy idea I study and work on has to be rooted in the premise that open societies, local communities, and people closer to their constituencies know better than any bureaucrat in Washington.

In 2017, as part of the historic tax reform package, my keystone policy that I’ve been working on since my early days in Washington was passed by Congress. Opportunity Zones are now law and have the potential of impacting nearly 21 million people who live in these low-income areas. And while the program is in the early works of implementation, the beauty of it is that it puts power into the hands of the people — folks who know their neighborhoods, communities, and streets better than any unelected Washington bureaucrat ever will.

Like those who supported me in my life, whether it was getting back on my feet and passing the ninth grade, or mentoring me as I opened my first small business, I want to make sure that every person willing and able to climb out of poverty is given the chance to make it out. My anchors were my Opportunity Zone, and in some way helped me out of some of life’s most difficult challenges. Now, through the Opportunity Zone initiative, I’m able to help encourage millions more stories similar to mine, and maybe, someone who will have benefited from it will one day be a better father, an company executive, a United States senator — or even president of the United States.

Sen. Scott participates in a roundtable discussion with Huntington, West Virginia leaders on how their communities can benefit from Opportunity Zones. (via Sen. Scott photo release)

Unlocking the potential of these overlooked communities truly is at the heart of my mission in public service. Every single person has the potential to do great things and spark big movements. These zones, designated by a state’s governor, are low-income tracts where investors, venture capitalists, and philanthropists can put capital to work by funneling their unrealized money into Opportunity Funds used to revitalize the community.

Unlocking the potential of these overlooked communities truly is at the heart of my mission in public service. Every single person has the potential to do great things and spark big movements.

Minorities comprise the majority of residents in the 8,700 Opportunity Zones across the nation, translating to 1.4 million minority households who could see their personal lives, financial security, and standard of living improve as a result of the local investments. What many don’t fully understand is that investors hold trillions of unrealized capital gains in the market — money that can be used to bring about new jobs, housing, businesses, and even parks. In return, investors get a temporary tax deferral for capital gains reinvested in a zone’s Opportunity Fund.

When this idea first came about, the hope was to allow freedom and flexibility for both communities and interested investors to work together and fund projects to help distressed neighborhoods reach their full potential. I’ve seen promising beginnings of this firsthand. In 2018, when the initiative started to roll out, I went on tour across the nation from New Hampshire, to Iowa, Florida, Colorado, and South Carolina to see the passionate ideas and entrepreneurial spirit of those who lives in these zones. It has been nothing short of amazing to see the amount of support from both Republicans and Democrats, and state and local officials for the program.

All that to say, the Opportunity Zone initiative is very much in its early stages and time will prove its successes. Many of those who have been tracking the development from the early days have started to notice that some governors have designated areas of their states that may already be on the upswing and may not need the extra incentive to develop.

At the end of the day, 71 percent of all Opportunity Zones have been designated as “severely distressed,” and of that, the average zone has a poverty rate nearly double the national average with more than one-fifth of all zones having poverty rates of 40 percent or higher. And while we all know that education is the key to success, there are more adults who live in Opportunity Zones right now that lack a high school education than those who have gone to college. It’s also important to note that according to two independent measures, over 96 percent of all designated zones are not even close to being gentrified — they are blank slates waiting to be invested and revitalized. Over the next 10 years, we will see amazing amounts of capital poured into these communities furthering their growth and proving the merits of the program. This is about helping the least of us, and providing avenues and exits off of the cyclical flow of poverty. Any bipartisan off-ramp to the continuous cycle of poverty should be hailed a miracle in its own regard.

This is about helping the least of us, and providing avenues and exits off of the cyclical flow of poverty.

So today, as we celebrate the possibility of future dreams and aspirations coming to life, I would be remiss to not thank the generations of Americans, including folks like my granddaddy, Artis Ware, on whose shoulders I stand today. Their sacrifices in the past — creating opportunity for me — paved a way so someone can benefit now and in the future. It is because of their belief in hard work, and faith in the Almighty, that a family went from the rural cotton fields of slave-holding South Carolina to the marble halls of the United States Congress. 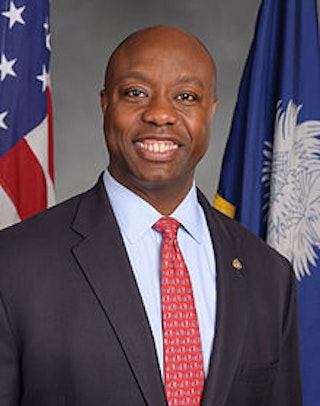