An Unpredictable World of Threats

Former Secretary of Defense Robert Gates discusses the world our military must be prepared for — from rogue states and terror threats such as North Korea and ISIS to world powers China and Russia.

Robert Gates is sworn in as the 22nd Secretary of Defense at the Pentagon, Dec. 18, 2006. (Helene C. Stikkel / Department of Defense)

Robert Gates has seen national security issues from as many different angles as any American in public service. A former CIA officer who rose to head the CIA and then serve as defense secretary under Presidents George W. Bush and Barack Obama, Gates has been part of the nation’s most important national security debates since the 1970s, when he served on the National Security Council under Presidents Richard Nixon, Gerald Ford, and Jimmy Carter.  In this interview with William McKenzie, editor of The Catalyst, and retired Army Colonel Miguel Howe, director of the George W. Bush Institute’s Military Service Initiative, Secretary Gates describes the threats he believes the nation and its military must prepare for next.

Before we discuss whether the U.S. military and its budget are ready for the next challenges, what do you see as the highest priority threats facing the U.S.? Is this a more muscular Russia? Our relationship with China?  Rogue states like North Korea? Non-state actors like ISIS? Cyber warfare? Something different?

You put your finger on the biggest challenge that our military faces, and that is the range of potential threats and conflicts, and their lethality, that the military prepare for.

I would tell our military leaders and cadets at the academies that our biggest challenge was creating a military through training and equipment that had the greatest possible versatility for the broadest possible range of conflict and lethality. That’s a huge challenge. How do you prepare for everything?

More broadly is the risk of an unintended confrontation with China or Russia that escalates. One of those could be with China in the South China Sea, or with Russia coming too close to one of our ships or somehow shooting down one of our aircraft or having an accident. Those situations would be very dangerous and they more likely would grow out of an unintended incident.

Then, of course, you have ISIS and the overall terrorism threat. There also is the cyber threat.

Longer term, the same four countries are the greatest concern. China certainly has the determination or intention to become regionally dominate in Asia militarily. I don’t think they’ll challenge us globally. The second is Russia, which is a declining power economically and in every other way except their military. And, as the Soviets found out, you can’t sustain a 21st century military or a modern military if the rest of your country is going to hell.

Then you have North Korea and Iran as longer-term regional challenges. Cyber is a long-term serious challenge for the country.

I would tell our military leaders and cadets at the academies that our biggest challenge was creating a military through training and equipment that had the greatest possible versatility for the broadest possible range of conflict and lethality.

Let’s start with Russia. How do we balance improving relations with Russia and yet not cooperate with a muscle-flexing Vladimir Putin?

As I said when I introduced Rex Tillerson at his confirmation hearing, the challenge for this administration is threading the needle between pushing back against Putin’s interventionism, aggression, and general thuggery and stopping a potentially dangerous downward spiral in the relationship.

This starts with letting him know that there is a new sheriff in town and that we will react more strongly to things. If I had been secretary [of defense] when that Russian airplane came within 30 feet or so of an American warship up in the Baltic, I would have recommended that the message be sent to Putin that the next time they come that close we’ll paint them with targeting radar and we may or may not shoot them down.

This also may mean figuring out if there’s a way to do more for Ukraine militarily, although we have to be careful. Ukrainians themselves have so many internal problems. At the same time you are pushing back against Putin, you have to figure out a way to send a message: It doesn’t have to be this way and we’re prepared for a better relationship but that’s going to require you to change your overall approach.

The challenge for this administration is threading the needle between pushing back against Putin’s interventionism, aggression, and general thuggery and stopping a potentially dangerous downward spiral in the relationship.

What do you see as the appropriate strategic approach for North Korea and China, which are somewhat related?

Personally, I think one of the lessons we learned from Iraq are the dangers of preemptive war based on intelligence. Everybody believed Saddam Hussein had weapons of mass destruction because he wanted everybody to believe he had weapons of mass destruction. So, how capable are these North Korean forces? The problem with any war is that you have no idea where it’s going to end up once the first shots are fired.

The kind of pressure that the administration’s trying to put on the Chinese to take a more active role, and getting the North to curb or freeze their programs, is important. Letting the Chinese know that we’re considering a bunch of other options is probably a smart strategy. They need to feel a push.

Clearly, they have not been concerned enough in recent years about possible U.S. actions to take any risks in their relationship with the North. To stop North Korea’s programs, or freeze them at the minimum, will take a lot more pressure on the part of the Chinese. The only way they will do that is if they worry that our reaction may create significant dangers for them in the region.

Don’t get me wrong. We will have a competitive relationship militarily with China in Asia. It’s not inevitable that it be adversarial. They have interests to protect. They have their own supply lines and shipping lanes they want to protect. And we want to continue to assert our freedom of navigation rights.

We will have a competitive relationship militarily with China in Asia. It’s not inevitable that it be adversarial.

The Obama administration made a mistake in waiting so long to challenge the Chinese building in the South China Sea and to basically claim that we were doing freedom-of-navigation exercises when in fact we were mostly doing innocent passage. The administration was trying to minimize the Chinese reaction.

One way we can let the Chinese know there is a tougher approach on the part of the United States is to do real freedom-of-navigation exercises around some of those islands. That sends a pretty powerful message.

They need to be concerned long-term, too. If the United States dramatically increases the size of our Navy, China will have to understand that their actions contributed to provoking that. There is a way for both sides to back away from becoming confrontational.

Let’s pivot to another threat you delineated for the near term: Iran. What should our strategy be with Iran? And how does our approach with Iran impact the rest of our security interests in the region, particularly Iraq and Syria and the transnational threats?

Iran and the Persian Gulf is another place where we have not been tough enough in the last few years. We should have accompanied the signature of the nuclear deal with a very assertive statement that we were not going to allow the Iranians to use whatever money they got from sanctions relief to increase their meddling and activities in the region.

They’ve clearly done that in Syria. And they are striking a more aggressive stance in the Persian Gulf. We need to send a message that if they continue to rush at our warships, with any vessel of any size that is considered a threat, it will be sunk or shot down. They should know that in advance because we’re in international waters.

We also need to figure out a way to push back more effectively with our allies against areas in which Iran is meddling, such as in Yemen. A more active role there, and in support of Saudi Arabia and the UAE  [United Arab Emirates], is a good thing.

What do you see as the threat of cyber warfare?

We have a lot of capabilities. Big states like Russia and China, as well as Iran, are highly unlikely to use their capabilities directly against the United States to disable significant parts of our infrastructure. Attribution is difficult but not impossible and I think that they would know that we would retaliate.

I think they have these capabilities. They are more likely to consider them like nuclear weapons. They are to be prepared for use in the event of an open conflict with the U.S., but otherwise put on the shelf.

My biggest concern about protecting our infrastructure is with a non-state actor or a rogue actor like North Korea, where they basically dare you to retaliate. Non-state actors are the greatest risk in terms of infrastructure, absent open conflict with another great power.

Let’s go back to where we started this conversation, and that is with the range of potential threats, the unpredictability of the operating environment now and in the future. How do we build a strategy and a force that provides that broad versatility and ability? How do we address readiness and force modernization within our resource constraints that we have? How would you build the force today for tomorrow?

If I were advising the administration, I would say that the biggest danger to the readiness and the capabilities of our force today is the continuing unpredictability of the budgetary environment. Over the last 10 years, the Department of Defense has begun a fiscal year with an enacted appropriations bill once and that was almost 10 years ago.

When you start every year with a continuing resolution and/or a sequestration, you cannot effectively address questions of readiness or capability. The notion of a one-time, one-year shot at a $54 billion increase, as the administration has proposed, doesn’t get you anywhere.

If I were advising the administration, I would say that the biggest danger to the readiness and the capabilities of our force today is the continuing unpredictability of the budgetary environment.

The Defense Department needs long-term predictability in terms of available resources so those resources can be allocated over the long term in a way that give you the capabilities and readiness that you need. The first thing is get rid of sequestration. Then, get back to regular budgeting where you know you’re going to have certain resources three, four, or five years out. Then, you can sequence things.

[Defense] Secretary [James]  Mattis’ approach makes sense. Once he gets some funding, he wants to first fix readiness, then replace equipment that’s already worn out, increase stockpiles of munitions, and turn to modernization. But the only way you can do that effectively is to have some kind of long-term predictability in the defense budget. My budget for 2012 was the last defense budget put together on the basis of defense needs. 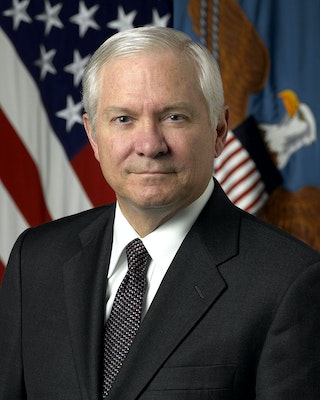