Religious Freedom is a Very Real Issue for Bob Fu

A conversation with Bob Fu, president of China Aid and a pastor in Midland, Texas

Nonprofit organization China Aid supports rule of law, religious freedom, and human rights. Bob Fu, its founder, has in turn drawn the ire of the Chinese government and its supporters — resulting in threats serious enough that he and his family have been forced from their home in Midland, Texas.

Bob Fu is President of China Aid and a pastor in Midland, Texas. Through China Aid, he provides assistance to Christians and other people of faith who have been arrested in China for their beliefs. Christianity, for example, is not recognized as an official religion so Christians can be persecuted.

In late September, demonstrators started showing up at his West Texas home, charging that he was a spy, among other falsehoods, and forcing the Chinese refugee and his family to seek safety in an undisclosed location. Since this incident began, which has included bomb threats against Fu and his family, his story has drawn attention in the Washington Post,  Foreign Policy,  World Magazine,  and on other sites.

Fu spoke in late October with Bush Institute Senior Editorial Advisor William McKenzie about his situation. Since then, the protests against the minister and his family have continued and he remains in an undisclosed location. Fu also discussed the plight of religious freedom in China, which his organization promotes along with the rule of law and protection of human rights. The most extreme case of persecution involves Uighur Muslims, whom Fu describes as suffering massive human rights violations.

How is your family dealing with the protests in front of your home? And what is this about?

We are holding together by the grace of the Lord. Our family is experiencing real trauma and our children are scared. This morning, for example, we had another bomb threat from a chat site. This group has made Midland, Texas, their national focus. This is a surreal situation.

This all started on September 26, while I was speaking in D.C. at a national prayer rally. The protesters came to our house, holding up New Federation of China flags, distributing flyers on our street, and chanting slogans that I am a fake pastor, a human smuggler, and a spy for the Chinese Communist Party.

Can you explain who is behind this?

Yes, Guo Wengei,  a Chinese billionaire in New York. These are his diehard followers. They want nothing but to destroy. And this is a national campaign.

They also have targeted Wu Jianmin, a democracy activist in Los Angeles who participated in Tiananmen Square. And they have gone after other prominent dissidents in Virginia, New York, Australia, Japan, New Zealand, Taiwan and other places.

He told his followers to go and kill enemies in this global campaign. These protesters reportedly have been promised $500 a day for protesting and a bonus of $100 a day for more aggressive actions. And not just here, but elsewhere too.

Why is he doing this?

I was shocked. I have had no public or private dealings with him. I have never met Guo Wengei or had a dispute with him. So, it is a total shock. The only thing I know is that who hates me and China Aid the most is the Chinese Communist Party. Intelligence officials have told me this, and I know this from experience. They hate me for our freedom work.

The only thing I know is that who hates me and China Aid the most is the Chinese Communist Party. … They hate me for our freedom work.

But I never thought that here in West Texas, they would come to our door and start this threatening campaign. But they have put out booklets smearing me, accusing me of accepting money from the [Chinese Communist Party], and having luxury houses. All these are baseless accusations.

Then, on October 5, I was speaking at a virtual U.N. event on religious freedom in China when my wife told me that busloads of people were outside, chanting slogans, and holding flags. This obviously is an order from Beijing, trying to silence our organization and dissidents. Since then, law enforcement felt the threat was credible enough that they evacuated our family to a secure location.

Let’s shift to talk more broadly about religious freedom in China. Freedom House reported in 2017 how the Chinese government’s controls over religion have intensified under Xi Jinping. How would you assess the controls since then?

Religious freedom absolutely has deteriorated since three years ago. Since February 1, 2018, when the new regulation of religious affairs took effect, China Aid has documented how more than 10,000 churches in Henan province were banned. Two-thirds of all government-sanctioned churches have been totally shut down. And house churches have been dismantled and banned. This is the start of the new Cultural Revolution.

China Aid has documented how more than 10,000 churches in Henan province were banned. Two-thirds of all government-sanctioned churches have been totally shut down. And house churches have been dismantled and banned. This is the start of the new Cultural Revolution.

We also have seen children, students, medical professionals, and others explicitly banned from entering government-sanctioned church buildings. Millions of Christian children were forced to sign a Chinese-prepared form renouncing their faith. You have the government attempting to change religious doctrine so that it is compatible with socialist or communist ideology.

We have reported, and so have other media, that the government has reinterpreted the Bible. For example, they reinterpreted the story of the adulterous woman being brought to Jesus by the Pharisees, where he said only anyone who has no sin can cast the first stone. They changed it to say Jesus had murdered the woman and declared himself a lawbreaker. That is in the official Chinese textbook.

When people of any faith are punished for their beliefs, what are those punishments like? For example, how long are the sentences and what happens in prison?

Pastor Wang Yi,  who met with President Bush in 2006, was sentenced to nine years with a charge of subverting state power for his preaching. Some are given 12, 14 years. Some are charged for things like financial fraud and national security crimes.

The largest number of prisoners of conscience are in Western China, where Uighur Muslims have been put in concentration camps in a massive violation of human rights. Women in the camps, for example, have been subjected to forced prostitution.

Why have the Uighurs been particularly oppressed?

They have suffered ethnic cleansing since the Chinese Communist Party took power 70 years ago. They are of a totally different ethnic nationality from Han Chinese. The Uighurs had their own culture, more like the Turks.

The conflict is intertwined with the desire of some Uighurs to be more autonomous, so there are issues about territory. But they are experiencing cultural and religious genocide. The conflict has been going on for the last 70 years. The party has forced them to be integrated into Chinese culture, including eating pork, even though the Uighurs are Muslims.

The One Belt One Road initiative aims to expand and strengthen the Chinese economic position through infrastructure and trade.

What should those of us in Western democracies do to address these fundamental lack of human rights?

It is time for the West and free nations to have a dramatic paradigm shift. We have had years of embracing business deals and wishing China becomes democratic with reforms and human rights protections. But China’s lack of human rights, rule of law, and religious freedom has entered the worst phase even as their economy has become the world’s second largest.

The appeasement policy needs to be abandoned. We should make it clear that if you don’t abide by rules, there are consequences. You can’t keep just yielding in the name of China saving face. If you give them an inch, they will take a mile. That has happened since they were granted admission into the World Trade Organization (WTO). Instead of abiding by the rules, they want to change them and make rules for the world.

We need to make it clear that we will not tolerate this. We need to sanction perpetrators at the highest level. Of course, the Chinese Communist Party virus, as I call it, has consequences. They have botched up the World Health Organization and multilateral organizations. They knew the virus so early.

China’s lack of human rights, rule of law, and religious freedom has entered the worst phase even as their economy has become the world’s second largest. The appeasement policy needs to be abandoned.

Freedom House also reported three years ago that Chinese Communist Party leaders view Chinese Buddhism and Taoism as “increasingly important channels for realizing the party’s political and economic goals at home and abroad.” Do you agree? If so, why?

Absolutely, it’s correct. That is their “China dream,” which is actually the “China nightmare,” when you consider what we are witnessing. Their ambition is in the South China Sea, in Africa, and elsewhere. And they were just voted in as a member of the U.N. Human Rights Council. That is a joke. Look at who voted for them: All the recipients of their One Belt One Road initiative.

How are believers of any faith working around these restrictions to follow their convictions?

This persecution now involves the party’s digital tyranny. The party has cameras that recognize images, so people have to be wary of going into a house church. As a result, you are seeing digital house churches. Even there, they are being detained for organizing an online prayer meeting for the COVID-19 pandemic. A Christian brother of mine was picked up for organizing such a meeting.

The Chinese Communist Party, led by Xi Jinping, is trying to build a country modeled after North Korea. This will only get worse.

The Chinese Communist Party, led by Xi Jinping, is trying to build a country modeled after North Korea. This will only get worse.

In this struggle between tyranny and freedom, how do you assess the situation in Hong Kong?

That is another example. They are eradicating one country, two systems and imposing a national security law that would impact all residents, including hundreds of thousands of foreigners, all Hong Kong people and those of us around the world. Any of them could be arrested for supporting the Hong Kong democracy movement. These are brave protesters facing a brutal crackdown. Some who have been detained are as young as 12 and some are as old as their 80s.

But I want to sound an encouraging note. Millions of Hong Kongers are fighting, not just surrendering themselves easily to the totalitarian regime. It will be very hard, though, without the support and solidarity of the international community. 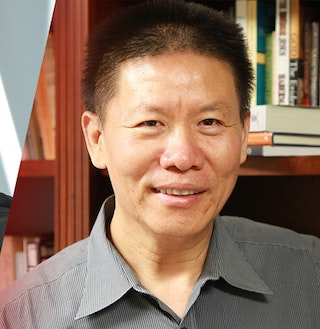