The Fast and Slow Worlds Are Colliding – and We Need Leaders

An Essay by Kenneth Hersh, President and CEO at the George W. Bush Presidential Center

The worlds of technology and politics move at vastly disproportionate rates. How leaders adapt to changing technological forces will be a determining factor for the future of America’s economic success.

After a week of intense discussions at January’s World Economic Forum annual meeting in Davos, Switzerland, what became apparent to me was the profound struggle between two competing forces impacting society today – those powering the fast world and those perpetuating the slow world. Both worlds exist and, as citizens, we are impacted by them each.

Up to this point, they existed with few real conflicts. However, these worlds are beginning to clash. We will need principled leadership to guide us through their collision.

Change is a constant in the “fast” world, and the pace is accelerating. As Canadian Prime Minister Justin Trudeau summed up best in Davos, “The pace of change has never been this fast, yet it will never be this slow.”

Driven by an insatiable appetite to crunch data, today’s technological advancements in the areas of artificial intelligence, machine learning, and data analytics are transforming the way we perform mundane tasks, conduct commerce, assemble goods, drive, and practice medicine. The speed of these transformations is threatening and exciting all at once. We have no idea what industries will change forever and what new industries will emerge.

In fact, with the advent of quantum computing in the next decade, computational speeds 100 million times faster than today’s semiconductors will take us even further into the unknown. Computing will move so fast that all passwords can be cracked. And, as we perfect our predictive analytical capability as well as our ability to manipulate the human genome, it is unrealistic to think that existential questions will not confront us.

Contrast these forces with those of the slow world. The slow world is typically slow by design. Deliberative bodies are best when they are slow, thereby precluding any single force from taking over. Checks and balances are a good design for a government concerned with protecting against the tyranny of the majority or authoritarian rule. Laborious processes, while maddening, can be healthy in that the constant push and shove of opposing forces prevent impulsive, irrational action.

The slow world is typically slow by design. Deliberative bodies are best when they are slow, thereby precluding any single force from taking over.

Our own government is the gold standard for such sloth-like speed. The federalist system forces a constant tug of war between state and federal systems. The often testy relationship between the three branches of the federal government seal the deal. Nothing emanating from U.S. governmental institutions happens quickly.

Parliamentary systems are no faster. They face a constant struggle of coalitions to maintain consensus with which to govern, often cobbling together platforms that are quite difficult for a single force to hijack.

Despite decades of technological advancements, doing business in the U.S. House of Representatives remains mostly unchanged from 1933, when this photo was taken. (via history.house.gov)

Similarly, multilateral institutions such as the United Nations, European Union, International Monetary Fund, and World Trade Organization are designed to be slow and deliberate. Absent a severe crisis, leadership changes, changing agendas, and a lack of consensus about shared goals prevent swift action.

Multi-party agreements such as trade treaties, global climate accords, and global aid agencies are equally slow to move. While often frustrating, the alternative is less desirable. Imagine if these powerful bodies could take on an issue, determine a course of action, and act in a hasty manner without proper vetting. The opening for abuse is obvious.

Even conventional warfare’s slow speed is an asset. The movement of large armies is hard to conceal and takes time. That time is valuable to telegraph that military action is imminent and to allow diplomatic channels to function.

Just like litigants often settle disputes as a jury deliberates, the presence of armies and inevitable action can bring combatants to reasonable compromise. Article I of our Constitution vests the declaration of war with Congress, thereby subjecting that action to a deliberative process, and for good reason.

The power of disruption

Typically, the fast and slow worlds do not collide. That is simply due to the fact that both are needed. Economies and standard of living benefit from the fast world while the social order benefits from the slow.

Central to this understanding is the concept of “disruption.” In the fast world, disruption is a positive force. It creates new industries, new opportunities, and new ways of doing things. Creative destruction is essential to moving the economy forward and has proven to be the best anti-poverty program in the history of mankind.

In the fast world, disruption is a positive force. It creates new industries, new opportunities, and new ways of doing things.

While industries don’t like to be disrupted, managers understand that inevitability and work daily to stay one step ahead of the pack, keeping their companies at the cutting edge. Understanding, as legendary Intel CEO Andy Grove said, “that only the paranoid survive” is wonderful motivation to spur innovation and the process of constant improvement.

Disruption and progress go hand in hand. While this Darwinian view of growth can be difficult, it has been proven empirically to be the most effective and humane way to allocate resources. These forces make the economy work and fulfill the vast majority of our citizens, leaving the responsibility to help those who fall through the cracks to the governmental authorities and the community institutions.

In the slow world, disruption is unwelcome. Disruption causes dislocations, realignments, and potential social unrest. So long as the two worlds don’t collide, disruption can be isolated in the fast world. Conventional institutions don’t like to be disrupted and they will push back. Progress has its limits when it encroaches upon our ability to govern in an orderly manner.

The collision of the fast and slow worlds

However, today, the two worlds are beginning to collide. Just look at on-demand ride sharing.  When Uber and Lyft burst onto the scene, cities that were accustomed to a regulated taxicab industry weren’t ready for this disruption. The two forces collided.

In 2016, citizens of Austin, Texas attend and speak at a public hearing to discuss the future of Uber and Lyft ride-hailing services in the city. (stock_photo_world / Shutterstock.com)

Consider also the development of blockchain technology, which has enabled clearing and registry mechanisms to exist in the ether of the cloud that previously were the domain of central institutions or authorities. Technologies built upon the blockchain, such as cryptocurrencies, usurp powers to issue fiat currency and its corresponding tools that were previously reserved for the state. How can a central bank administer monetary policy if a meaningful portion of its commerce is conducted with a cryptocurrency? An important aspect of the rule of law emanates from a sovereign’s power to issue fiat currency.

Similarly, cyber intrusions represent the fast world’s encroachment on the slow. Small numbers of people in bizarre places with easily accessible tools can have outsized impact. This asymmetry is tantamount to the fight against terror.

However, these terrorists never need leave their own homes. This phenomenon is foreign to defense departments that were set up to either defend or take physical territory. Whether it is a cyber act of terror attacking critical infrastructure like the electrical grid or simply using clever messaging designed to go viral to impact public opinion or influence voting, the ability for the fast world to impact the slow is clear.

Where do we go from here?

It is futile to try to slow progress. A “turn back the clock” strategy never succeeds, as the Uber/Lyft example shows. We must adapt to a new world where disruption happens.

It is futile to try to slow progress. A “turn back the clock” strategy never succeeds, as the Uber/Lyft example shows.

Think back to the adaptive leadership that guided the world after World War II. The victorious battle against tyranny had left the world devastated, requiring the creation of a new international order. Leaders from both parties and the worlds of commerce, diplomacy, and the military didn’t have a precise roadmap to show them how to create that new world. Instead, they used their wisdom, principles, and training to establish a set of institutions that allowed the post-World War II era to blossom into one of the most stable and prosperous in modern history.

Today, we need a similar model of leadership. We know, for example, that we will need education systems that produce life-long, adaptive learners. Those systems will ensure workers have the skills for new and creative jobs while artificial intelligence takes over more routine, mundane positions.

There is no blueprint for the slow world to harness the energy and creativity of the fast world. Instead, leaders who can apply their experience and values can help the slow world adjust to the disruptive forces.

There is no blueprint for the slow world to harness the energy and creativity of the fast world. Instead, leaders who can apply their experience and values can help the slow world adjust to the disruptive forces.

Opposing those forces, or ignoring them, will only lead us into trouble. But leaders who possess a strong sense of compassion and a steady moral compass can reinforce the qualities that have made America so special — democratic values, respect for minority rights, and the protection of personal liberties. Their understanding of a core set of principles will allow these worlds to evolve without compromise.

Strategy and tactics can change, and they will. True leadership cannot be disrupted. 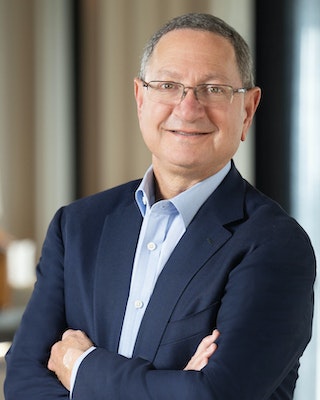