Cities of Tomorrow Will Need Sustainability and Conservation

Green spaces and native ecology in cities aren’t just a luxury – they’re an important part of the infrastructure that benefit the environment, businesses, and citizens.

Klaus Desmet is the Ruth and Kenneth Altshuler Centennial Interdiscipinary Professor at Southern Methodist University. The economics professor studies urban economies, including the role that geography plays in the development of cities. In April, he led a panel discussion at the George W. Bush President Center’s Forum on Leadership on why conservation matters in our cities and our own backyards.

The Stanford University-trained economist later spoke with Catalyst Editor William McKenzie about how cities across the country are competing to offer parks, green spaces, and other urban amenities. A growing emphasis on conservation is related to their ability to attract residents and jobs, a challenge that is increasingly competitive in the service economy.

As you look at places like Dallas, Brooklyn, and Denver, people are talking about making cities more livable, walkable, and enjoyable. How did this renewed focus on parks, greenbelts, and public spaces come about? What is driving it?

When people decide where to live, urban amenities such as green spaces and the natural environment are becoming increasingly important. Two or three factors are driving this.

Michael Van Valkenburgh, James Farmer, and Klaus Desmet on why quality of life and conservation matter in cities.

One factor is a shift towards a more comprehensive view of wellbeing that is not simply based on income. We are becoming more focused on quality of life, and that includes a healthy lifestyle. For example, people want to go outside. They enjoy the outdoors and like being in nature. And they want to have these possibilities not just in the countryside, but also in urban settings.

A second factor is that in a service-based economy businesses are freer to go where people want to live. In the past, say during the Industrial Revolution, there often was a disconnection between places that might be nice for living and places that might be good for production.

Factories had to go to areas where they had easy and cheap access to energy. Industries were sprouting up in the coalfields of northern England. Whether those locations were pleasant places to live was secondary. In a service-based economy things are different. Companies can produce anywhere, so cities compete vigorously to attract residents and employment. One dimension they are increasingly competing on is these urban amenities.

In a service-based economy things are different. Companies can produce anywhere, so cities compete vigorously to attract residents and employment.

A third factor is more generally related to the revival of the central city. Crime rates in the United States peaked at the beginning of the ‘90s. At that time, many city centers were not very attractive places to live, independently of whether there were many parks. Since then, crime rates started to experience a rapid decline. City centers are again more livable and people are coming back. As they do, they want these amenities.

Is this a luxury for a more affluent America? Or is this some return to a human need to connect with nature?

It’s a little bit of both. You could view the increasing emphasis on quality of life and healthy lifestyle as a bit of a luxury. But the growing emphasis on urban amenities is not limited to the affluent. It is a much broader phenomenon that recovers the idea that cities have always been built around public spaces.

You could view the increasing emphasis on quality of life and healthy lifestyle as a bit of a luxury. But the growing emphasis on urban amenities is not limited to the affluent.

If you go back to the Greek cities of antiquity, they were built around public spaces. And in medieval England, villages had a common green. That village green was partly for productive grazing purposes, but it was also used as a place where the community would meet and celebrate.

Parks and greenbelts bring people together. They create community and there’s a human need for that. We like nature for its own purpose, but also as a place that brings people together.

Is there evidence that this focus on conservation is helping cities grow economically?

There definitely is, and it goes back to businesses wanting to locate where people want to live. If people care about these quality of life issues, then the same will be true for businesses.

A good illustration is the recent competition for the second headquarters of Amazon. They have set forth a number of criteria and one is quality of life– think of outdoor recreational opportunities, hiking trails, bike paths. Amazon itself does not need this to be productive, but that’s what their employees want.

In the future, cities that are able to compete on those dimensions will be able to attract more employment and residents. This game of competition between cities and locations is connected to urban amenities and future employment.

As you know, more people across the world are living in cities. How do cities accommodate the need for housing and jobs and yet have some room for greenbelts, parks, and urban amenities?

I am a strong believer that these two objectives are not in contradiction with each other.

In fact, when in the past cities chose to ignore urban amenities, things did not always work out very well. For example, in the 1950s and 1960s, highways were being built to connect the central business district to the suburbs. This may have been an efficient way to bring people to work, but it made the downtown area very inhospitable as a place to live. Not surprisingly, people fled the city center.

But in recent decades things have started to turn. Take the example of Dallas. What has happened here over the last 10 or 15 years? The city has covered a highway in the downtown area, built Klyde Warren Park, and expanded the Dallas Arts District. Before you knew it, people wanted to move back to the center of the city.

Take the example of Dallas. What has happened here over the last 10 or 15 years? The city has covered a highway in the downtown area, built Klyde Warren Park, and expanded the Dallas Arts District.

This shows that the objectives of accommodating jobs and allowing for green spaces and other amenities are not in opposition to each other– quite the contrary.

I was struck by some of your work on the geography of development. How does the role of “place” come into play in terms of development?

The data show that there is a very strong connection between what we could call the spatial distribution of economic activity and development.

We know that cities, especially large cities, are laboratories of innovation, creativity, and experimentation. Progress often comes when people and industries cluster geographically in the same space. There are many well-known examples, such as high-tech in Silicon Valley and finance in Hong Kong. But it’s a broader phenomenon. It’s the idea that when you put people together in a small geographic space, there will be learning and progress.

Progress often comes when people and industries cluster geographically in the same space… It’s the idea that when you put people together in a small geographic space, there will be learning and progress.

This goes back to a basic feature of human nature, which is that we are very good social learners. We also have a good brain to learn by ourselves, but we are at our best when we learn through interaction with other people. Creating ecosystems, such as cities, where people have the opportunity to intensely interact with each other, is a powerful force for economic growth and development.

If you ask, what is the evidence, look, for example, at patent activity as a measure of innovation. A disproportionate share of that happens in urban environments. Urbanization is very good for development.

So what role will conservation and natural resources play as cities plan for the future?

When you talk about large cities, you’re talking about the geographic concentration of many people on a fairly small space. That will always put some type of pressure on resources, such as water.

This implies that we need to think about how to make our cities as sustainable as possible. That includes thinking about native plants and landscapes and incorporating those into our green spaces and parks for the simple reason that they don’t disrupt the overall ecosystem and they will be more adapted to the local climate and soil. They will be less demanding on the environment.

The park built around the [George W.] Bush Presidential Center is a superb example. It reflects the North Texas prairie and most of the water comes from rainfall that has been collected. It is sustainable ecologically.

Many people worry about cities putting a lot of pressure on the environment, which is true. But it is also important to put things into perspective: a large share of water being used in our economy goes to agriculture.

In California, for example, the water problem is more an agricultural issue than a problem with, say, San Francisco or Los Angeles. The water problem therefore needs a more comprehensive approach. This is not something that can be solved city-by-city.

Animals like foxes or wolves are reappearing in areas where they had completely gone extinct. The countryside itself is becoming a bit wilder. That is an indirect positive effect that cities have on sustainability and the environment. 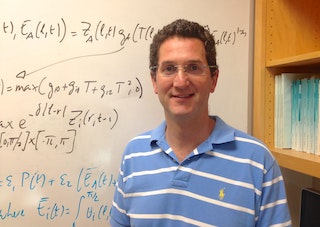