A Community, a Country, and a Global Partnership Are Creating a Healthier Botswana

Fighting an epidemic requires more than monetary foreign aid. Local communities, regional governments, and global support must come together and work in unison — as it has in Botswana through PEPFAR and Pink Ribbon Red Ribbon.

There’s an African proverb that says if you think you’re too small to make a difference, spend a night with a mosquito. Ouma Rammidi may or may not have heard that proverb, but she certainly has taken it to heart. Ouma volunteers her free time by riding a bicycle up and down dirt roads across Botswana. It’s a humble exercise, but one with mighty intentions.

After losing her mother to cervical cancer when she was young, Ouma made it her mission to spread awareness across her country to reduce stigma and help educate others on the importance of women being screened and treated.

Cervical cancer, caused by the Human Papillomavirus (HPV), is the most common cancer and leading cause of cancer mortality among women in Botswana. But it’s preventable, and if caught early, easily treatable.

Since 2013, Ouma has reached more than 65 villages on two wheels. “This journey is painful, long and difficult,” she told a local paper. “But I will not rest until I reach my aim of saving lives.”

Three months ago, she was one of several women who met with President and Mrs. George W. Bush for a roundtable conversation at the Tlokweng Main Clinic in Gaborone, Botswana. They were joined by U.S. Global AIDS Coordinator Ambassador Deborah Birx, U.S. Ambassador to Botswana Earl Miller, Botswana Minister of Health and Wellness Dorcas Makgato, doctors, nurses, and women whose own stories of survival were of the cervical cancer screening and treatment they had received. The work of Pink Ribbon Red Ribbon brought the group together.

Launched in September 2011 by the Bush Institute, the U.S. government through PEPFAR (The President’s Emergency Plan for AIDS Relief), Susan G. Komen®, and the Joint United Nations Programme on HIV/AIDS (UNAIDS), Pink Ribbon Red Ribbon is a global partnership that leads coordinated action to save women’s and girls’ lives from cancer.

But before Pink Ribbon Red Ribbon, there was a deadly epidemic threatening Botswana and other countries across the continent of Africa, and a call for coordinated action on a global scale.

More than 15 years ago, over 35 percent of adults in Botswana were living with HIV, and the disease was set to wipe out an entire generation. In 2000, then-Botswanan President Festus Mogae went to the United Nations General Assembly to advocate on behalf of Botswana’s citizens. As he told the world then: “We really are in a national crisis. We are threatened with extinction. People are dying in chillingly high numbers. We are losing the best of young people. It is a crisis of the first magnitude.”

“We really are in a national crisis. We are threatened with extinction. People are dying in chillingly high numbers. We are losing the best of young people. It is a crisis of the first magnitude.”
– Botswana President Festus Mogae in 2000

President Mogae raised the profile of the suffering in his country due to AIDS, and was determined to seek support to ease the burden.

In the United States, President Bush answered the call.  “Seldom has history offered a greater opportunity to do so much for so many,” he said when he announced PEPFAR in 2003 to reverse the burden of HIV/AIDS in sub-Saharan Africa. Today, PEPFAR is credited with saving nearly 12 million lives.

Dineo Sumoke, member of an HIV+ support group in Gabane, Botswana, holds the red ribbon as an awareness symbol against HIV/AIDS in September 2007. (Gianluigi Guercia/AFP/Getty Images)

Because of the success of PEPFAR in Botswana and elsewhere, women were living full lives with HIV.  But a new threat to public health followed.  Women living with HIV are four to five times more likely to develop cervical cancer. So building on PEPFAR’s platform, President and Mrs. Bush launched Pink Ribbon Red Ribbon.

“Seldom has history offered a greater opportunity to do so much for so many.”
– President George W. Bush when announcing PEPFAR in 2003

In 2015, following two successful vaccination demonstrations, the government of Botswana launched a nationwide campaign to vaccinate all girls age 9 to 13 in the country, with its own resources.

The first year of the program achieved an impressive 90 coverage rate of the target population, and now the country is in its third year of nationwide rollout, fully funded and managed by the Government of Botswana.

Pink Ribbon Red Ribbon currently partners with five countries in sub-Saharan Africa, and one in Latin America.  In 2012, Pink Ribbon Red Ribbon began its partnership with Botswana, and has realized success in expanding HPV vaccination nationwide, incorporating the see-and-treat approach to cervical cancer as part of national standard-of-care policy, and in establishing see-and-treat services for cervical cancer screening in all regions of the country.

Tlokweng Clinic is an example of Botswana’s successful expansion of its national cervical cancer control efforts. Just last year, Tlokweng Clinic started offering see-and-treat services, a simple screening method using vinegar and treatment with cryotherapy in a same-day approach. The services there are supported by Pink Ribbon Red Ribbon, which has helped scale up see-and-treat to 34 sites across the country.

In Botswana, by the end of 2017’s first quarter, nearly 25,000 women have been screened for cervical cancer, and more than 70,000 girls have been fully vaccinated against HPV since Pink Ribbon Red Ribbon began there in 2012.

The success of Pink Ribbon Red Ribbon in Botswana, though, cannot be attributed to any one person, or group of people, or to one organization. Its success lies in the strength of the partnership — in community action, nationwide commitment, and global support. And by effort at every level, from the Office of the President to a woman simply willing to tell her story.

[Pink Ribbon Red Ribbon’s] success lies in the strength of the partnership — in community action, nationwide commitment, and global support. And by effort at every level, from the Office of the President to a woman simply willing to tell her story.

Pink Ribbon Red Ribbon aligns its approach in each partner country under the leadership of the national government, which drives strategy and sets the roadmap for cervical cancer control.  In Botswana, a National Strategic Plan for Cervical Cancer Prevention and Control helped initiate and continues outlining the policy and implementation plans for these services.

“It’s not an option. It has to be done,” said Sheenaz El-Halabi, the Permanent Secretary of the Ministry of Health and Wellness, of screening for cervical cancer and vaccinating girls against HPV. “These are not options or choices that we can make, no. It’s absolutely necessary.” Her agency serves as the main coordinating force for cervical cancer efforts in Botswana.

Molly Rammipi, the program coordinator of the National Cervical Cancer Prevention Programme, and her team provide the link between the facilities delivering care and the leadership of the Ministry of Health and Wellness.

Molly was at the Tlokweng Clinic when President and Mrs. Bush visited. Molly is working with the staff there to strategize how to promote the services, and encourage more women to have a cervical cancer screening through outreach programs that help improve the number of women receiving these life-saving services.

A healthcare system is only as strong as its workforce, as workers stand on the frontlines of care delivery.  Without a strong pool of healthcare workers, the vision of a healthy Botswana would not translate to reality.  As one of the first nurses trained on the see-and-treat technique in Botswana, Gracious Ditlhabang joined the roundtable discussion.

A healthcare system is only as strong as its workforce, as workers stand on the frontlines of care delivery.  Without a strong pool of healthcare workers, the vision of a healthy Botswana would not translate to reality.

She first met President and Mrs. Bush when they visited Bontleng Clinic in 2012, where see-and-treat was piloted, and where Gracious works daily to deliver screening-and-treatment services that can save women from cervical cancer. Then, Pink Ribbon Red Ribbon was just rolling out its cervical cancer programming with the Ministry of Health and Wellness, and few healthcare workers were trained in this method. Since then, Gracious, along with others, has helped to train many more nurses in see-and-treat.

And, of course, community health promoters and women like Ouma help elevate the issue of cervical cancer and create demand for services. Educating women about their risk and urging them to take preventive action helps save their lives.

The government of Botswana has demonstrated political will and helped create national buy-in. As a result, this has led to crucial support not only for reversing the HIV/AIDS epidemic and scaling cervical cancer services, but in strengthening the healthcare system overall.  However, Botswana faces challenges that are replicated in national healthcare systems across sub-Saharan Africa.

Limited funding and competing priorities are at the top of the list. Government ministries and agencies vie for constrained resources and tough decisions have to be made.

As integration of healthcare services continues to gain momentum, financial burdens may see an easement.  And the Global Fund’s new commitment to work to integrate cervical cancer activities into funding requests should help fill some of these gaps.

Here at home, the debate continues in Washington about how much foreign aid will continue to go to programs abroad, including those in Botswana, even as their impact remains clear. On his recent trip, President Bush reminded, “The development of a healthcare system that can reach all corners of a country takes time, and now is not the time to abandon the efforts that have taken place up to this point.”

Botswana faces challenges that are replicated in national healthcare systems across sub-Saharan Africa. Limited funding and competing priorities are at the top of the list.

As Botswana continues to carry more of the financial and administrative management to strengthen its healthcare system holistically, international partnerships need to continue to support the efforts being made in Botswana and around the globe.

Beyond funding, recruiting, training, and retaining a strong force of healthcare workers continues to be a struggle.

While integration of services is a priority for the Botswana government, there is still work to be done.  From government ministries and agencies, to site-specific services, there must be an effort to streamline work that will benefit the people of Botswana. For example, if a woman comes to the clinic for prenatal care, she should also be counseled and tested for HIV, receive information on cervical cancer screening, and learn about the benefits of vaccinating her girls against HPV.

Working in silos and competing to claim credit can hamper the delivery of care. Pink Ribbon Red Ribbon’s model brings all stakeholders into the fold while following the government’s lead, and has been effective in aligning resources and expertise for maximum improvements and impact. Stakeholders across the spectrum of healthcare, especially women’s health, should agree that collaboration is key.

Leithailwe Wale, a 40-year old woman who was educated about the importance of being screened, took the initiative to do so and received treatment for cervical pre-cancer just last year. At Tlokweng Clinic, she told President Bush, “I’m clear now and I’m grateful.”

There’s another African proverb, one that says sticks in a bundle are unbreakable. Strength in numbers can have far-reaching effects. In Botswana, it started with a national crisis, and became a unified mission to save lives not just from AIDS but from women’s cancers. And to make an impact across the healthcare system, it takes the resilient work of many – from the president of the country to a woman on a bicycle pedaling down the road ahead.

To make an impact across the healthcare system, it takes the resilient work of many – from the president of the country to a woman on a bicycle pedaling down the road ahead. 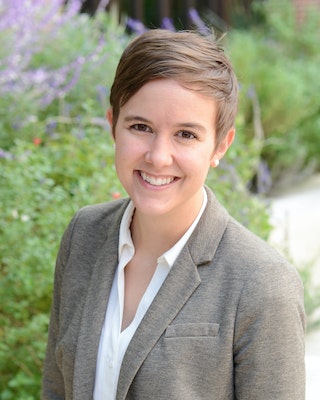