Be Patient with Central America's Faltering Transition to Democracy

Matthew Rooney, Director of Outreach and Strategic Partnerships at the Bush Institute, describes the heroic efforts by the people of Central America and how the international community must remain patient in their efforts to transition to democracy.

As the tide of democracy seems to recede in the so-called Northern Triangle of Central America – El Salvador, Guatemala, and Honduras – Americans will best advance our own interests by being patient. The challenges of inadequate institutions of justice date back to their founding in the early 1500s, almost 300 years before the United States was founded. Yet a serious effort to build democratic systems of justice began there just 30 years ago. With patient support for our allies in those societies, we can extend the frontier of justice to our south and better secure our own country.

Just a few years ago, the countries of the region would have made most observers’ lists of successful democratic transitions. They were far from perfect, but they had all emerged from decades of civil conflict in the early 1990s. And, for 30 years, they enjoyed basic political stability, regular electoral cycles, and a series of peaceful transitions of power.

There was the occasional step backward – Honduran President Manuel Zelaya’s removal from office in 2009 was the most glaring – and corruption remained rampant. But it was increasingly taken for granted that the only way to power in those countries was via the ballot box.

But now, seemingly all of a sudden, all three countries are poised to abandon democracy: Nayib Bukele, the President of El Salvador, is using democratic forms to concentrate ever more power in his own hands, violating separation of powers and due process, while also stifling political debate. Alejandro Giammattei, President of Guatemala, has fired the government’s own corruption investigators after his predecessor shut down a widely respected international corruption watchdog. And Manuel Zelaya is back in the Honduran Presidential House – albeit as husband of President Xiomara Castro, though he is rumored to hold a good deal of power behind the scenes.

This trend can’t be laid at the feet of either right or left: President Giammattei, a former director of Guatemala’s prison system, is a tough-on-crime social conservative who has prioritized public funding to privately developed infrastructure projects. President Castro comes from the left of Honduras’ political spectrum and campaigned on an explicitly “social justice” platform. President Bukele ran for office on both sides of El Salvador’s partisan divide before forming his own “New Ideas” party.

Endemic corruption is a common factor that these countries share. When Central Americans talk about corruption, they of course mean the beat cop who takes a little cash in exchange for overlooking a minor traffic offense. And they mean the politician who pockets a percentage off the top of a public contract.

But corruption in the Central American context is more fundamental than just officials lining their pockets. Endemic corruption is about institutions – including public institutions like political leaders, government agencies, and legislatures; social institutions like religious organizations, civil society groups, and school systems; and private sector institutions like enterprises, industrial associations, and labor unions – that have so completely lost credibility with the public that they are unable to function.

One factor that these countries share is endemic corruption. When Central Americans talk about corruption, they of course mean the beat cop who takes a little cash in exchange for overlooking a minor traffic offense. And they mean the politician who pockets a percentage off the top of a public contract.

Of course, these institutions function in the narrow sense that they collect revenues or dues, employ staff, make policy decisions, issue regulations, pass legislation, and publish studies. But all of these “official” acts are undermined by the sneaking suspicion that their true agenda is different from the stated purpose of the institution:

This pervasive corruption is different in degree, but not in kind, from the garden variety corruption of petty sums illicitly changing hands. Money still changes hands, of course, but money is just the instrument of the grand corruption that is at work.

Corruption on this scale is, unfortunately, not exactly rare. But it is not universal, either. Judging from the Transparency International Corruption Perceptions Index,, it seems to be found in many parts of Latin America, where most countries are below the global average. It is widespread in the Caribbean, in sub-Saharan Africa, in parts of the Middle East, Asia, and Eurasia as well. The U.S. and Canada, most European countries, and most other OECD member countries are reasonably free of corruption, and certainly don’t suffer from the kind of grand corruption that threatens the integrity of national institutions.

In many countries, the institutions of governance and law enforcement are able to prosecute corrupt actors before corruption becomes a systemic threat. In the United States, for example, a combination of robust congressional oversight and methodical court proceedings was able to lay bare a glaring case of Cabinet-level corruption in the Teapot Dome scandal of the 1920s, in which the Secretary of the Interior accepted kickbacks in exchange for sweetheart deals on oil leases on government-owned land. The incident, which was the first use of a “special counsel” to pursue political-level corruption, led to reforms to the Interior Department’s procedures for managing public lands and prepared the way for reforms to government procurement rules.

In Central America, however, such suspicions arise frequently, but generally do not lead to successful investigations; the work of the International Commission Against Impunity in Guatemala (known as CICIG) is an important exception – or was, until CICIG got too close to then-President Jimmy Morales in 2016 and was forced to shut down as Mr. Morales’ term was ending.

Just in the past few months there have been numerous allegations made across the region of malfeasance in procurement of COVID vaccines and PPE, and a number of prominent political leaders are suspected of ties to narcotics trafficking. Most spectacularly is the former President of Honduras, who was recently extradited to the United States.

Why do countries follow such different trajectories in dealing with corruption? In the case of Central America, it is worth recalling that what we think of as the institutions of justice – police, prosecutors, courts – were founded over 600 years ago as instruments of imperial control. Their purpose was not to punish criminals, but to suppress a conquered population, and they lacked even the most rudimentary trappings of democratic oversight.

From this perspective, what we are seeing today in Central America is not a failed democratic transition or a hopeless case of irreversible endemic corruption. We are in fact seeing the early stages of a heroic effort by the people of Central America to seize democratic control over their countries and find a path to equality of all citizens before the law.

In many cases, the very buildings where judicial proceedings take place today were built during that foundational period. Two hundred years ago, as the Spanish Empire collapsed, those institutions were quickly co-opted by elites, who made them into instruments of elite control, still with only the most superficial democratic oversight. It is only in the last three decades that a serious effort has been made to transform these instruments of suppression into organizations whose purpose and culture is to impartially administer justice.

From this perspective, what we are seeing today in Central America is not a failed democratic transition or a hopeless case of irreversible endemic corruption. We are in fact seeing the early stages of a heroic effort by the people of Central America to seize democratic control over their countries and find a path to equality of all citizens before the law.

It is nothing less than an attempt to fix a systemic problem that has been 500 years in the making. As Americans have experienced in our own, just barely 250-year struggle down this same road, this kind of systemic change is not linear and tends to proceed in fits and starts, with the occasional switchback along the way.

As we continue our own search for justice, we can best advance our interests in Central America, and help the Central Americans in their struggle, by bringing a level of patience to bear.

As we continue our own search for justice, we can best advance our interests in Central America, and help the Central Americans in their struggle, by bringing a level of patience to bear. We might even have a moment of gratitude that we have partners in Central America who are engaged in this fight and, despite the setbacks of the moment, committed to the long term. At a minimum, we need to be realistic about the dimensions of the challenge they face, understanding that building institutions of justice on a foundation of imperial control is much more complex and difficult than our own challenge – which we know has been great enough.

Be Patient with Central America's Faltering Transition to Democracy

In the eighth installment of Democracy Talks, we explore the struggle between democracy and authoritarianism and how partnerships are key to creating and sustaining freedom around the world. Read more.
Abraham Lincoln: A Poet of Democracy Who Inspired Freedom’s Spread
Safeguards Keep our Elections and Democracy Secure
A Vibrant Culture Smooths a Transition to Democracy
We Need a Global Fight for Freedom
Democracy Makes the World More Secure and Prosperous
Strengthening America's Democracy
How to Reverse Central America’s Authoritarian Trends
When It Comes to Democratic Transitions, the Middle East Is a Desert
Challenging Information Autocracies

Strengthening Democracy Around the World and at Home William McKenzie, Chris Walsh, and David J. Kramer on June 23, 2022 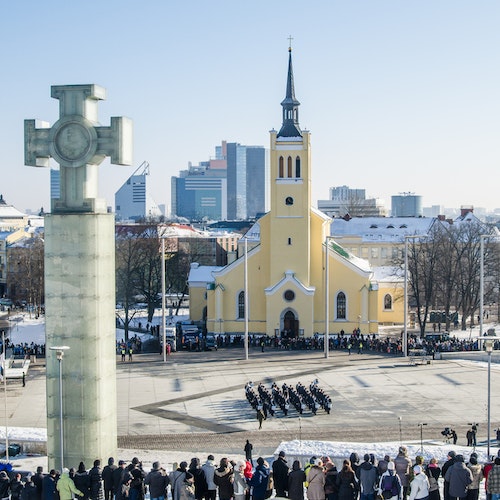 A Vibrant Culture Smooths a Transition to Democracy Toomas Hendrik Ilves, President of Estonia from 2006 to 2016, shares how Estonia’s independent culture made its transition to democracy easier than some nations after the Soviet Union collapsed. Read the article 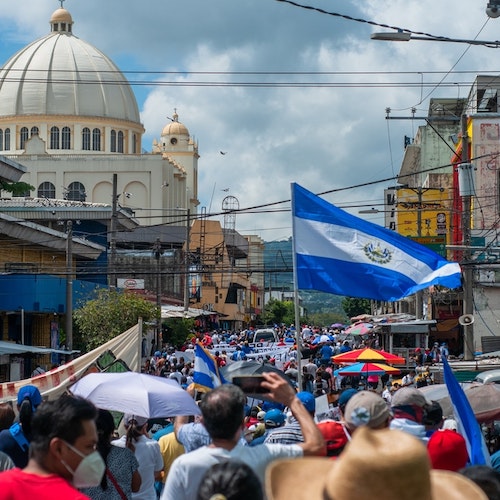 How to Reverse Central America’s Authoritarian Trends Luis Guillermo Solis, former President of Costa Rica from 2014 to 2018, describes how authoritarian trends are at work in nations like Nicaragua and El Salvador. He likewise details his concerns about democracy across Latin America. Read the article 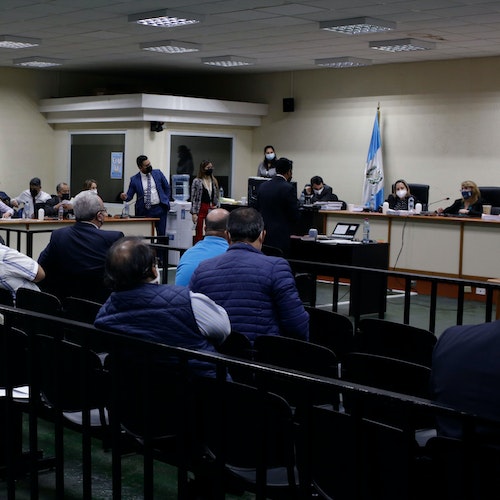 How American Diplomacy Can Help Resolve the Root Cause of Migration From Central America Leaders in the Northern Triangle in Central America face the ultimate in lack of trust: They have lost credibility with their citizens. The United States, by virtue of geography and trade agreements, has to make careful diplomatic decisions if it is to help those countries regain trust. Read more in The Catalyst