Why some U.S. cities outperform others as happy places

WalletHub ranks 182 large and mid-sized cities according to a composite happiness score in their just-released “2022’s Happiest Places in America.” Just under half of each city’s score is based on income and employment data or on measures closely associated with income like life expectancy and food security. The rest consists of non-economic measures widely considered to predict community well-being – mental and physical health, divorce rates, parks and greenspace, and subjective scores for emotional wellness and civic pride.

So why do some cities score higher than others as great environments for people to live flourishing lives?

It helps to be a high-income city. Thirty-four of the 50 happiest cities in WalletHub’s list are located in metropolitan areas ranking among the top quarter of America’s metros for median household income, while only 2 of the 50 least happy cities are in these prosperous metros. This relationship is no surprise, since WalletHub treats income and employment as key ingredients of urban happiness. But it also reflects the reality, confirmed in numerous studies, that people’s happiness rises with household income.

It also helps to be a scenic, temperate city facing the Pacific Ocean. Sixteen of WalletHub’s 50 happiest cities are Californian or Hawaiian coastal communities known for natural beauty, high incomes, and extraordinary housing costs – attractive places to live if one can afford them. These include San Francisco, San Diego, and Honolulu but mostly consist of smaller communities like Huntington Beach, California.

But a still better predictor of happiness is whether a city is a high-opportunity community – not the same thing as having high median income. A new Bush Institute-SMU report identifies 64 metros qualifying as “cities of opportunity” based on living standards adjusted for local housing costs, upward mobility as defined by Harvard University economist Raj Chetty’s Opportunity Insights group, and net inbound migration from elsewhere in the United States.

A majority of WalletHub’s 50 happiest cities are in these high-opportunity metros. Meanwhile, none of the 50 least happy cities are in metro areas ranking among the top quarter of metros for upward mobility or net in-migration. Most of the happy, high-opportunity cities on WalletHub’s list are less glamorous places not known for their scenery, like Sioux Falls, South Dakota and Cedar Rapids, Iowa. They also include large suburban cities like Plano, Texas and Overland Park, Kansas. Extreme unaffordability means the wealthy coastal localities on WalletHub’s list don’t qualify as high-opportunity cities, with the unique exception of San Francisco.

And why do some metro areas outperform the rest as engines of opportunity? Our research shows that high-opportunity metros tend to have high educational levels and strong research-oriented universities and medical centers. They offer relatively permissive environments for new housing and small businesses. They have welcoming attitudes toward immigrants and other newcomers. And they almost universally score high for social capital – the civic engagement and trust among citizens that make a community tick.

For cities aiming to promote happiness, one strategy is to provide spectacular Pacific views and perfect year-round weather. For everyone else, the best strategy is to become a high-opportunity city, based on education, anchor institutions, growth-oriented and housing-friendly policies, warm welcomes for newcomers, and a strong sense of community.

Why some U.S. cities outperform others as happy places

The Bush Institute and nearly 30 organizations are calling for immigration reform on March 2, 2022 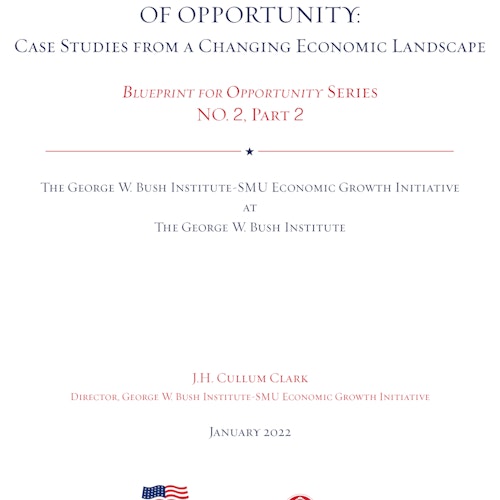 The New Geography of Opportunity: Case Studies from a Changing Economic Landscape A diverse range of cities and metropolitan areas have emerged as high-opportunity regional economies in 21st century America. This report examines those cities and towns and outlines their strengths. Learn more