On Nov. 28 Hondurans will cast their ballot in the upcoming general election, shaping many policy issues, including the country's economic policy framework.

Hondurans are heading to the polls on Nov. 28 to elect a new President, members of the National Congress, and 20 members of the Central American Parliament. The results will shape many policy issues, including the country’s economic policy framework.

The existing framework puts Honduras in just the 28th percentile (D) on the Bush Institute-SMU Economic Growth Initiative’s Global Competitiveness Scorecard. The Scorecard combines some of the world’s leading global indices to evaluate the relative performance of countries on a variety of measures. The underlying data points to some of the reasons an increasing number of Hondurans are seeking a better future in the United States — and a to-do list for a Honduran government determined to foster greater prosperity.

Digging deeper, Honduras scores below average on four of the six key Scorecard indicators, including business environment (14.3%), legal system and property rights (15.6%), trade environment (32.9%), and health and education (27.2%). Underinvestment in infrastructure and information technologies weighs down the business sector, as does the persistence of a large informal economy.

Regarding the legal environment, Honduras ranks near the bottom of the world on ease of starting a business, enforcing contracts, protecting minority investors, resolving insolvency, and paying taxes. Weak rule of law also hampers the country’s trade environment, since certainty and legal recourse are necessary to support the growth of international commerce.

On the education front, gang infiltration of schools prevents many students from finishing secondary or high school, leading to an under skilled workforce.

To address these challenges, there are policies that the incoming Honduran Administration should embrace. New initiatives must be supported by a steadfast commitment to rid the region of crime and corruption.

One high-impact strategy for limiting corruption and increasing transparency in Honduras is the adoption of a digital development strategy. Digitalization of financial activities, such as paying taxes and banking, reduces traditional opportunities for illicit activities, including money laundering. The digitalization of government services also promotes efficiencies and transparency, thereby restoring trust in government. Of course, a digital strategy should also include much-needed investment to provide citizens the high-speed internet and mobile connectivity that are required to access digital services.

Another way for Honduras to increase economic opportunity is by working together with its continental partners. For example, Honduras could support linking U.S.-DR-CAFTA with other U.S. trade agreements, in particular North America’s USMCA free trade agreement. Technically known as cumulation, this initiative would allow a company manufacturing in Mexico to source components in Central America that would count toward the threshold for duty-free access to the United States under USMCA. The result would be to stimulate job creation in Central America, generating new opportunities for Central Americans to thrive at home instead of emigrating to the United States. Furthermore, the potential for increased trade with the United States would incentivize the Central American business community to improve transparency and root out corruption.

Digitalization and cumulation offer a chance for Honduran leaders, together with their Central American and North American partners, to create a country that will offer all Hondurans the prospect of a prosperous and secure future. The upcoming election is an important opportunity for Hondurans to choose leadership committed to moving their country in that direction.

In an interview with CNN, Matthew Rooney, Managing Director of the Bush Institute-SMU Economic Growth Initiative, points out the challenges businesses are experiencing when attempting to invest in Central America.

What Does Investment Tell Us About the Increase of Migrants at the U.S.-Mexico Border? by Kristin Kent Spanos and Nicholas Saliba

Increased investment in the Northern Triangle nations of El Salvador, Guatemala, and Honduras is needed to improve economic outcomes and nurture an environment in which young people no longer feel the need to flee their homes in search of safety and employment. 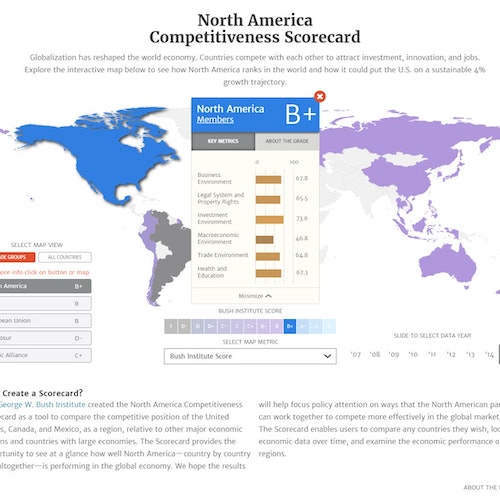 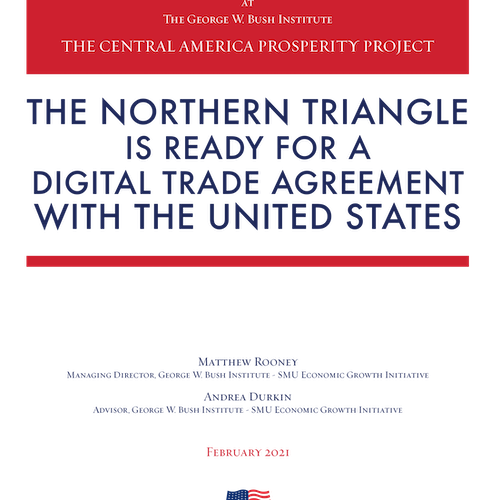 Central America Prosperity Project: The Northern Triangle Is Ready for a Digital Trade Agreement with the United States The George W. Bush Institute – SMU Economic Growth Initiative believes that these Northern Triangle countries would strongly benefit from entering into an agreement with North America that emulates the digital trade chapter of the U.S.-Mexico-Canada Agreement and incorporates the kinds of regulatory cooperation and capacity building approaches embodied in other new digital economic partnership agreements.  Learn more