Olympics Are Starting a Year Late, But Maybe the Timing Is Perfect

After months of limitations and isolation from the pandemic, Kevin Sullivan, Senior Advisor for External Affairs, states that the 2020 Olympic Games have come at the perfect time.

After months of limitations and isolation from the pandemic, many of us long for shared experiences – just in time for the Olympics, which open this Friday.

“Americans are more divided than ever, gridlocked over social issues, race, gender and the economy,” according to an Associated Press special report. Geopolitical expert Ian Bremmer put it this way: “There is no advanced industrial democracy in the world more politically divided … than the United States today.”

Amid that division, we’re craving “shared experiences” – the things that “bring us closer together” – with “unprecedented global appetite,” according to global events firm TRO.

The 2020 Olympic Games in Tokyo are beginning a year late, but maybe the timing is perfect.

“As the world emerges from troubled times, we really believe the Tokyo Olympics will be the most meaningful Olympic Games of our lifetime,” Molly Solomon, Executive Producer of NBC’s 7,000 hours of coverage from Tokyo, said. “People are craving a shared experience after all we've been through."

Back in 2008, President George W. Bush welcomed U.S. Olympians to the White House Rose Garden for a send-off celebration before the group departed for the Summer Olympics in Beijing.  “Team USA shows the great power of sports to bring people together – and there's no sporting event that unites people like the Olympics.” President Bush told the athletes. “All Americans will rally behind you when you compete.”

Team USA shows the great power of sports to bring people together – and there's no sporting event that unites people like the Olympics.

That support is one of the lasting memories that former Olympians have taken away from their experiences at the Games.

Ryan Berube of Dallas – who won a gold medal at the 1996 Atlanta Summer Olympics by swimming the final leg of the 4x200 meter freestyle relay – remembers seeing thousands of people in the stands when the team was bused to Knoxville, Tennessee, for four days of final prep and focus after reporting to Atlanta for Olympic outfitting and provisioning. On the final day at the University of Tennessee pool, the swimmers were told that some locals had been invited to watch their last practice before returning to Atlanta.

“We showed up to stands with 2,000 people sitting in them – just to watch us do nothing more than warm up,” Berube, a former SMU All-American, said. “They had no expectation other than to see all of us off to the Olympics and support us and let us know they loved us and were behind us.  It was a gut check for us. That moment was the moment for those of us that hadn’t been to the Games before. We all realized why we were there and what we were there to represent.

“It was the perfect setting to step back into the fray of Atlanta and the Olympic Village and the media spotlight,” he said. “We were ready to go. With the support we felt, we were prepared to take on the world.”

As always with the Olympics and Paralympics, there are no shortage of compelling storylines and incredible athletes to rally behind.  Of course, there is Simone Biles, the most decorated gymnast in history, but don’t overlook her teammate Suni Lee.  Multievent swimmer Caeleb Dressel and Katie Ledecky headline a U.S. swim team that brings 11 teenagers to Tokyo.  NBC is billing the highly regarded men’s and women’s track and field teams as the “United States of Speed.” With world record holder Usain Bolt of Jamaica retired, first time U.S. Olympian Noah Lyles aims for gold in the 200 meters. Veteran Allyson Felix has won nine medals, including six golds.

We will also find inspiration from international Olympians.  The youngest athlete to compete in Tokyo will be Hend Zaza, a 12-year-old table tennis player from Syria. The oldest will be 79-year-old Hiroshi Hoketsu, a Japanese equestrian rider.

There are plenty of new sports to check out on the Olympic program with the additions of karate, skateboarding (highlighted by 13-year-old British phenom Sky Brown), surfing and sport climbing, along with the return of baseball and softball.

Paralympian Melissa Stockwell, a U.S. Army veteran who was featured in President Bush’s 2017 book, Portraits of Courage: A Commander in Chief’s Tribute to America’s Warriors, will compete in her third Paralympic Games, which run from Aug. 24 to Sept. 5. Stockwell, who won bronze in the para-triathlon at the 2016 Rio Games, goes for gold in Tokyo. Her inspirational story of resilience and grit was recently showcased on the Today show.

Learn more about the stories of the Olympians and Paralympians who will be representing the United States at teamusa.org/athletes.  Prepare to be inspired.  And when you watch them compete, prepare to have your spirits lifted.

“Throughout the opening ceremony, the medals, the tears, and the celebrations, the Games are a clear display of what our world can look like when we see past our differences and rather celebrate our common humanity,” Michael Bailey, Program Manager of the Bush Institute’s Leadership Programs, recently wrote.

The Tokyo Olympics won’t solve all the challenges facing our divided Nation, but it’s a start.

“We’ve all been searching for connection, and COVID has done wonders to remind us of how valuable that connection between each of us as human beings is,” Berube said. “These Olympics, more than at any other time, give us the opportunity to remind us of what it means to be an American and to be able to rally behind each other as humans and Americans.  During these times of separatism and individualism, I hope these Olympics remind us of the commonality we all have as Americans.”

Olympics Are Starting a Year Late, But Maybe the Timing Is Perfect

The Olympics don’t have to be the only time our world unites Michael Bailey on July 14, 2021 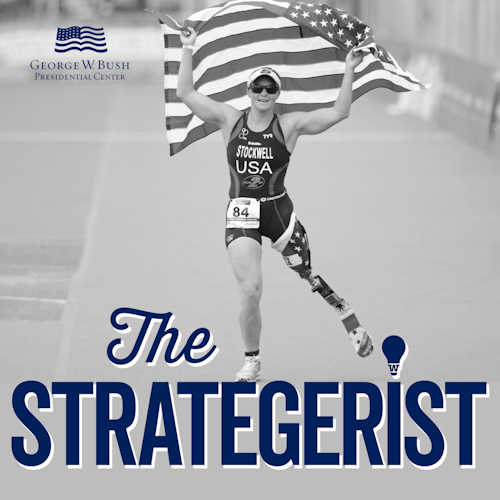 The Strategerist — Melissa Stockwell -- From Wounded Warrior to World Champion In this Veteran's Day episode, we talk to U.S. Army Second Lieutenant Melissa Stockwell -- the U.S. first female to lose a limb in combat and now Paralympic Games medalist -- about her journey representing America both before and after active duty. Listen and subscribe