The Bush Institute’s Jieun Pyun speaks with Andrea Gittleman, program manager for the Simon-Skjodt Center for the Prevention of Genocide at the U.S. Holocaust Memorial Museum, about the Museum’s new exhibit, “Burma’s Path to Genocide”.

Jieun Pyun: Who are the Rohingya and why are they being persecuted?

Andrea Gittleman: The Rohingya are an ethnic and religious minority community in Burma. They are a mostly Muslim group in a diverse, yet mostly Buddhist, nation. While in the early twentieth century the Rohingya were part of the economic, social, political, and cultural fabric of Burma, a military dictatorship that took power in 1962 was marked by extreme nationalism and policies that targeted Burma’s minority groups, including the Rohingya. Little by little, the Rohingya were cast as foreigners in their own country as national and local policies chipped away at their rights. Even today, leaders in the Burmese government refuse to acknowledge the term “Rohingya” and consider Rohingya foreigners or immigrants from neighboring Bangladesh.

JP: The name of your new exhibit is “Burma’s Path to Genocide”. What is genocide and why is it important to call the Rohingya crisis a genocide?

AG: In a legal sense, genocide is described in the Convention on the Prevention and Punishment of the Crime of Genocide as specific acts committed with the intent to destroy, in whole or in part, a national, ethnic, racial, or religious group. The specific acts include killing members of the group; causing serious bodily or mental harm to members of the group; deliberately inflicting on the group conditions of life calculated to bring about its physical destruction in whole or in part; imposing measures intended to prevent births within the group; and forcibly transferring children from the group to another group.

More generally, it’s important to know that genocide is usually not a singular event, but a process. The violent attacks on Rohingya men, women, and children by the Burmese military in 2016 and 2017 shock the conscience - and so too should the decades-long persecution this community has faced. One Rohingya man named Nur compared the long history of discrimination as “like you are destroying the roots of a tree [under the ground]. That’s the actual genocide.”

After close analysis and consultations, the U.S. Holocaust Memorial Museum determined in 2018 there was compelling evidence that the Burmese military committed genocide - as well as crimes against humanity and ethnic cleansing - against the Rohingya population. Naming the crimes after a careful examination of the facts helps accurately frame the experience of victims and shines a spotlight on the specific obligations of the Burmese government to punish perpetrators and prevent recurrence.

JP: Tell us more about the exhibit. Why did the project start? Why was it important for the U.S. Holocaust Memorial Museum to highlight this issue?

AG: The digital exhibition is online now, and a physical version of the exhibition will open in the Museum later this year. We want to make sure our Museum visitors know that genocide did not end with the Holocaust, genocide is preventable, and that communities remain at risk of genocide and other atrocities around the world today. We also wanted to serve as a bulwark against genocide denial, as the Burmese government continues to deny that genocide took place and has minimized the extent of the harm to the Rohingya people.

We were incredibly moved by photographer Greg Constantine’s work, and wanted to partner with him to create a moving testament to the experience of the Rohingya community. In order to tell their stories as accurately and carefully as possible, we chose to explore the experiences of several people, all from the village of Maung Nu in northern Rakhine State, Burma. We wanted to relay their own stories of their childhood, what happened on one brutally violent day in August 2017, and what they have experienced since.

JP: What is the current situation in Rohingya refugee camps?

AG: Naomi Kikoler, the director of the Museum’s Simon-Skjodt Center for the Prevention of Genocide, and Kyra Fox, the Center’s research assistant, traveled to camps near Cox’s Bazar, Bangladesh in early 2020 to speak with Rohingya refugees. While the refugees in Bangladesh live in relative safety, they still face serious risks. The camps are overcrowded and refugees are not allowed to pursue livelihoods or use the internet to communicate, and access to formal education is very limited. Recently, many refugees have tried to escape the camps on boats and have become stranded at sea, with other countries in the region refusing to permit them entry. With the Covid-19 pandemic, we fear that the population of genocide survivors are facing yet another grave threat. Covid-19 will likely spread rapidly in the overcrowded camps, and without access to the internet, refugees have little information about how to prevent the spread of the virus.

JP: In the exhibit, a Rohingya man said, “It will take us a hundred years to get back the life we had been living since our forefathers.” What is the future for Rohingya people?

AG: Many displaced Rohingya in Bangladesh told us that they yearned to go home to Burma. They know, however, that they will not be able to safely return until the Burmese government has made substantial progress in dismantling the systems of persecution and violence that have for so long harmed the Rohingya population. Until such progress is made, the risk of genocide persists for Rohingya in Burma and many displaced Rohingya know that they will be living in limbo, unable to return home yet unable to fully establish a prosperous future in Bangladesh.

JP: Who can solve the current crisis? What actions should be taken by them?

AG: The Burmese government has the primary responsibility for dismantling the policies and structures that have discriminated against the Rohingya population for so long; ensuring effective accountability for the military for its atrocity crimes, including genocide; and preventing such crimes from occurring in the future. The Museum’s Simon-Skjodt Center for the Prevention of Genocide recently released a report identifying key steps the Burmese government can take in order to abide by its obligations to prevent and punish genocide. Some of these steps include investigating allegations of widespread and systematic sexual violence, ending the practice of forced labor, restoring full citizenship, and ending restrictions on freedom of movement and access to health care. While the primary responsibility rests with the government of Burma, other actors - including powerful nations as well as Burma’s neighbors - have roles to play to press the Burmese government in making substantive progress on these fronts.

JP: What are some actions the United States can take to solve the Rohingya crisis?

AG: The U.S. should use a variety of tools to press the Burmese government to make substantive changes so that Rohingya refugees, and those who remain in Burma, can live safely without the risk of genocide in the future. The U.S. should recognize that the crimes against the Rohingya amount to genocide and should ensure that those responsible for genocide are held accountable. Regarding the upcoming elections in Burma this November, the U.S. should carefully consider how to respond if Rohingya are not allowed to participate in the elections, either as voters or candidates. The U.S. can take a strong stance in reinforcing norms about the importance of Rohingya and other minority groups participating in public affairs in Burma.

Liberty and Leadership Program Scholar on U.S. ruling that violence against Rohingya people amounts to genocide

This week, the Biden administration determined that violence committed against the Rohingya people by Burma's military amounts to genocide and crimes against humanity. Liberty and Leadership Program Scholar Wai Wai Nu, Founder and Executive Director of Women’s Peace Network, reacts to the ruling and discusses next steps she would like to see from the U.S. and international community.

In a recent op-ed , Kenneth Hersh, President and CEO of the Bush Center, writes that TotalEnergies and Chevron’s announcement that they’re exiting Burma to protest human rights abuses against Burmese civilians is the private sector equivalent of economic sanctions, and it was the right thing to do.

One of our Bush Institute Liberty and Leadership Scholars speaks to the healthcare crisis occurring during the military coup in Burma.

Bush Institute Liberty and Leadership Scholar Dr. Nay Lin Tun tells us what it's like being a medical professional in Burma right now. 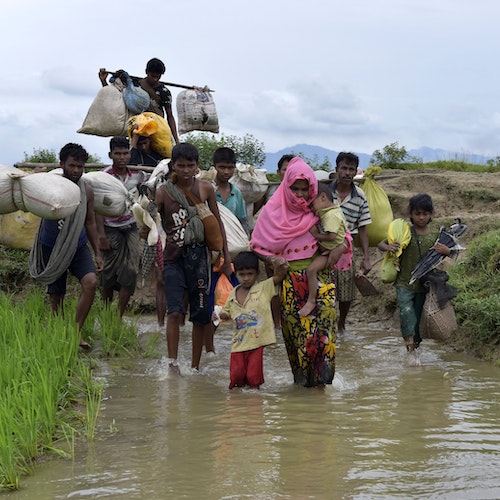 Policy Recommendations: Investing in Democracy in Burma Burma: Now is the time to invest in democracy and achieve lasting peace Read the article