Keep Lebanon in Your Thoughts

WE Lead scholar Layal Yacoub was in the stairwell of her building when she was thrown forward by the force of a massive explosion just 1 kilometer away.

The blast on Aug. 4 shattered the windows in her room. According to Layal, had she been inside, she would have been killed. So many were not as lucky.

More than 170 people died and thousands were injured following the explosion in Lebanon’s capital that also destroyed a significant portion of Beirut’s city center. We are grateful that our WE Lead scholars in Lebanon are safe, and we are keeping them and their countrymen and -women in our thoughts during this grim moment and the arduous road ahead. The tragedy has made life all the more challenging for the Lebanese people, including the 300,000 who are now homeless in the midst of a global pandemic and an unprecedented economic crisis.

While many Americans remember images of a war-torn Lebanon during the 1970s and 1980s, the conflict ended 30 years ago, and those memories had grown increasingly distant in a Beirut trying to reclaim its pre-war moniker as the “Paris of the Middle East.” With an active nightlife, heartwarming people, beautiful beaches and summer festivals drawing the likes of Andrea Bocelli, the country saw a boom in tourism in 2019 and was hoping for increasingly banner years before the coronavirus pandemic struck.

Which isn’t to say that Lebanon wasn’t having big problems before the blast.

The country was already in the midst of a severe economic crisis and dealing with COVID-19. Half of the population lives near or below the poverty line as job losses, hyperinflation, and lack of access to bank accounts fuel the struggles of daily life. Moreover, Lebanon hosts the highest number of refugees per capita in the world, including more than 1.5 million Syrians and 174,000 Palestinians. According to a World Food Program (WFP) survey conducted earlier in the summer, 50% of Lebanese, 63% of Palestinians, and 75% of Syrians were worried they would not have enough to eat. And it’s no wonder; WFP recorded a 109% increase in food prices in June 2020.

The blast has just worsened the situation. While at this point it appears to have been an accident – occurring when a fire at a warehouse ignited a cache of explosive material that had been improperly stored near the port for several years – the Lebanese people were unhappy with the government’s handling of the situation. An ongoing investigation is focusing on port officials, but many people have blamed the government as a whole and the country’s political elites.

Massive protests  triggered the resignation of the prime minister and his cabinet earlier this month, leaving a caretaker government in place until new elections and political negotiations lead to the formation of a new one. Many are calling for early parliamentary elections and officials’ resignations.

Protests against leadership aren’t new. Demonstrations that started last year were already calling for changes to the political system itself, which opponents see as contributing to corruption and poor governance.

One of the issues is the very structure of the Lebanese government, which was established as a power-sharing compromise as the country gained independence from France in 1943. The so-called National Pact allocates political power among Christian, Sunni Muslim, and Shia Muslim religious communities based on their share of the population in the 1932 census. This division of political power hasn’t changed since, even as demographics have shifted, and neither has the political elite. Sectarian tensions and other external factors contributed to the civil war that lasted from 1975 to 1990 and killed an estimated 150,000 people.

We take solace in the leadership and perseverance of our WE Lead scholars like Layal, an attorney with expertise in humanitarian and international law. She and other Lebanese WE Lead scholars advocate for human rights and dignity, rule of law, and access to education and opportunity in their personal and professional lives.

In an upcoming post, you will hear directly from them about the impact of current events, what the international community needs to know, and how Lebanon and its people can move forward in the hope of a brighter future.

Keep Lebanon in Your Thoughts 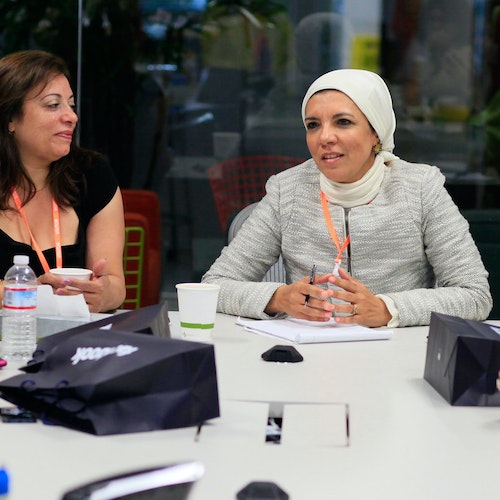 WE Lead The WE Lead program equips women from the Middle East, North Africa, and Afghanistan with the skills to become more effective leaders. Learn more