El Salvador’s Democracy is at Risk

Largely unremarked by the U.S. press, a political impasse in El Salvador over funding for a crime-fighting strategy has recently escalated into a confrontation between the country’s government under President Nayib Bukele and the National Assembly, the legislature controlled by the main opposition party.

The confrontation climaxed on February 9 when the government deployed units of the Salvadoran Army and National Civilian Police to pressure the National Assembly over the approval of a loan for El Salvador’s security strategy; calling for an unconstitutional extraordinary session. President Bukele subsequently relented and offered to give the members of the National Assembly more time, but the images of troops and police officers, carrying rifles and dressed in battle fatigues, barricading the legislature have nonetheless weakened the already fragile institutional integrity of the country’s democracy and rule of law.

For 12 years, El Salvador was ravaged by a civil war that came to a head in 1992 when a democratic nation was born. We have fought to ensure democracy prospers and have experienced the benefits of civil liberties and more stability in relation to other Latin American nations. At risk today are our free elections, peaceful alternation of power, freedom of speech, access to public information, independent Constitutional Justice, and a functioning system of checks and balances.

Recognizing the importance of strong institutions to maintain a healthy democracy, we at FUSADES, the top-ranked think tank in Central America according to the Global Go-To Think Tank Index 2019, agree that Salvadorans need more security given the high levels of violence, but at the same time we need strong democratic institutions. We do not believe that improving security requires us to sacrifice our freedoms.

President Bukele’s recent actions have violated the Peace Accord that put an end to El Salvador’s civil war in 1992, and broken the country’s constitutional order.  A lack of respect for the checks and balances weakens our already fragile democracy. This instability could hinder rule of law and deter economic and social progress.

To protect our liberties, we call for the following from our government:

Additionally, to the international community and our neighbors, your support has been fundamental in building El Salvador’s democracy. Your continued backing is critical for our young democracy to prosper. We ask that you exercise a mediating role and guiding hand in light of our president’s break with the constitutional order.

We must continue to protect our fragile democracy, and, more importantly, our congressional elections in 2021. The crisis has not been truly resolved and there is a risk that this disruption of the democratic order will be repeated.

As civil society, we will remain alert and engaged so that the freedoms now enjoyed by the Salvadoran population are not violated through actions such as those we have experienced in recent days. The main lesson of our civil war, after all, was that development of our country does not require the use of force and weapons, but a permanent dialogue in the search for consensus.

El Salvador’s Democracy is at Risk

Investment in the region would promote industrialization in Central America, boosting productivity and prosperity there and opening job opportunities that would encourage Central Americans to stay home instead of seeking to emigrate to the United States.

Q&A: How Guatemala is Faring During the COVID-19 Crisis by Ioanna Papas

Fighting Coronavirus with Digitization in Central America by Matthew Rooney

The Central American countries, desperate to shield their underfunded public health systems from a tsunami of COVID-19 patients, have taken draconian measures. From the Bush Institute's point of view, the dramatic impacts from these measures strengthens the case for digitization in the region.

On March 13, Claudia Ramírez returned to El Salvador from a trip to Germany. On her arrival, she was required by the Salvadoran government to enter a 30-day quarantine in a government-run facility. 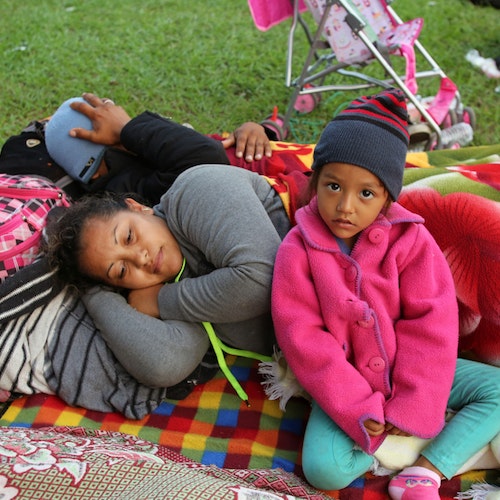 Saving El Salvador Central America relies on America’s friendship and we have a shared vision: to make Central America a safe and great place to live by fostering responsible and responsive leadership. Read the article