Writing about the struggles of Afghan women and girls got me thinking about my own daughters. When the Taliban took power in 1996, Afghan women were brutalized, isolated, and marginalized. What would my young girls’, aged six and four, lives have been like under this brutal regime?

I imagined their smiling, inquisitive faces erased from class photos because they wouldn’t be allowed to attend school. I saw their futures as doctors, architects, artists, scientists, chefs, police officers, teachers, or star athletes wiped away because they would be banned from pursuing careers. I saw them marginalized in a bleak society where they could not vote or have a say in their country’s political future. Simply playing hopscotch or riding bikes in the neighborhood without a male guardian’s direct supervision would be forbidden.

This imagined suffering was the real anguish of Afghan girls. The Taliban extinguished millions of dreams while in power. Thankfully, with this regime’s fall, Afghan women and girls have regained many freedoms and are fighting for a more equal society. They have a long way to go, but progress has been made. Sadly though, regimes like the Taliban still exist around the world.

Beyond moral underpinnings that all women possess human dignity and should have access to healthcare and education, investing in girls (and ultimately women) is necessary for building more peaceful, prosperous, and just societies. Educated women help grow their country’s economy. Empowered women have a positive impact on their nation’s stability domestically and internationally. It stands to reason though, a society that hinders the development of girls curbs the potential of the women they become – which in turn opens a country to poverty, despair, and extremism.

However, supporting women and girls in today’s world relies on more than government policies. It’s also about individual actions and how, regardless of our culture or religion, we treat others. Even in the United States, only 48 percent of women feel they are treated with respect and dignity. Compare that to the 70 percent of men who believe women are treated with dignity. Clearly, we are not on the same page, and that’s a problem because fighting for empowerment shouldn’t be a woman’s struggle alone.

Support from male allies is needed. To me, that starts with dads and father-figures. As a dad, I want my daughters to realize their full potential, not just for themselves but to be decent people who make the world a better place. I also have a son. I want him to grow-up supporting his sisters, his female classmates, and, ultimately, his female colleagues. I want him to be an advocate for female empowerment.

My views on how best to shape my children’s perspectives are based on experiences with the many strong women in my life— from my daughters, to my wonderful wife, to fantastic colleagues, to the example my mom set when I was growing up.

Still, I wanted to gain further perspective and asked my George W. Bush Institute colleagues — Farhat Popal who was born in Afghanistan, Jieun Pyun who is from South Korea, and Kaitlyn McClew who grew up in Dallas — how fathers can better support their daughters in today’s world. Acknowledging this wasn’t a scientific study, it was fascinating that, despite their different cultural backgrounds, all three shared remarkably similar answers.

They talked about establishing a relationship of trust, promoting personal independence and emotional confidence, listening (that was a big one!), being present, wanting a better life for their daughters, knowing when to be protective and when to let go (speaking as a dad, that’s a tough one), and generally being a good role model.

Whether it’s Afghanistan, the United States, or elsewhere, championing women’s empowerment starts by letting girls know they are loved, valued, and supported. No matter how hard things get, these are the most fundamental things I do in my role as a father. Sometimes, it’s as simple as saying, “I’m proud of you.”

To my fellow dads and father figures, I hope you’ll join me in the awesome responsibility of providing girls with the strong foundation of love, respect, and self-confidence they’ll need to be empowered women. You’ll make your daughter’s day (and hopefully beyond). 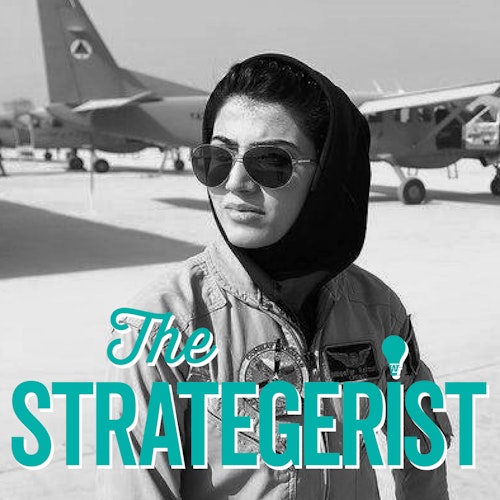 The Strategerist — Episode 04: Niloofar Rahmani Like all women under Taliban rule, Captain Rahmani was forbidden basic rights. But her story is one of courage, as she became the first female fighter pilot in the Afghan military after the fall of the Taliban.  Listen and subscribe