Dalel Krichen has dedicated her life to breaking down gender barriers in Tunisia and helping women start their own businesses.

My story is no different than that of the many women in Tunisia and around the world who are challenging what is expected of their gender in order to advance the cause of women’s empowerment for women in their countries.

Ever since I can remember, the issue of gender equality has mattered most to me. Maybe because I grew up in a family where girls and boys were treated the same, I found it frustrating to go outside and see the biased advantages that men had over women. I could not bear seeing girls and women shouldering most of the work at home. All of the cultural limitations vexed me even though Tunisia has always been a pioneer in the Arab world for women’s rights. I soon made promoting gender equality and women’s empowerment my mission in life.

I worked hard in school, receiving my Baccalaureate and being awarded a scholarship to go to the United States to pursue my dream of becoming a civil engineer. This achievement allowed me to be among the first female civil engineers in Tunisia—a male-dominated domain at that time.  When I went back to Tunisia, I knew it was time for me to contend with my desire to help women.

I began by going to remote, impoverished areas and listening to women. They were determined to improve their situations. I delivered leadership courses to women all over the country, encouraging them to dream beyond traditional roles in their families and communities. I discovered that economic independence is vital to them. During one of these trainings, a young woman who had very little had been offered a job. Without anybody to take care of her baby she felt she would be unable to accept the opportunity. Another woman, who was very poor with four children, offered to take care of the baby for free while the mother worked. People in these communities have so little yet are always willing to share.

Then I was asked to join the Women’s Enterprise for Sustainability program, where I was trained to help and assist women launch their own businesses. My focus has been women in STEM. My interest in supporting such women finds its essence from the gender disparity that prevails in these fields in Tunisia, and all the potential offered by these sectors to the Tunisian economy in terms of innovation and employment.

When I was accepted to the George W. Bush Institute Women’s Initiative Fellowship, I found it to be a wonderful experience because it broadened my scope and built my capacities to be more effective. I made sure to cascade what I learned to all the women who I work with now. The program also introduced me to the Women’s Democracy Network; by fostering relationships there, I am now the president of its Tunisia chapter.

This year was very special for us Tunisian women because parliament passed two very important bills. The first one related to fighting violence against women and the second one advancing parity between male and female candidates on electoral lists. These are huge milestones in the journey towards equality at the national level.

I’m so proud of Tunisian women, of their commitment, of their tenacity, and of their will to create change. When I see all the potential they offer, I can’t help imagining what could be successfully accomplished if women were the real partners of men. 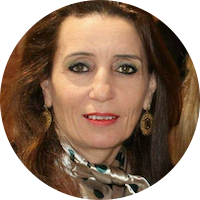 One Big Reason to Keep KORUS (And Five Economic Facts that Matter) Laura Collins and Lindsay Lloyd on September 14, 2017