A select group of Burmese Young Leader graduates from the Liberty and Leadership Forum were in Washington meeting with policy makers. In a series of articles, they have outlined Burma’s greatest challenges and the need for U.S. leadership in Asia.

There is so much opportunity in Burma and Asia, unfortunately China, North Korea, and other challenges in the region threaten stability and stifle the spirit of human freedom. To help counter these challenges, the United States must engage with this region, cultivate partnerships, and champion the fundamental rights of people across Asia.

With this in mind, a select group of Burmese Young Leader graduates from the Liberty and Leadership Forum were in Washington, D.C. meeting with policy makers and thought leaders. In a series of articles, they have outlined Burma’s greatest challenges and the need for U.S. leadership in Asia.

Sai One Leng Kham, an elected representative to the Upper Parliament of Myanmar, is the third in a series of Q&A’s with the Bush Institute’s Young Leaders.

Read previous entries in this series:

What are the three biggest challenges for Burma’s parliament?

How can the United States better support Burma’s parliament to legislate effectively and respond to voters?

The United States could help introduce lessons learned from other transitions to democracy. Help us understand how better civil-military relations in those transitions evolved and how the legislature and the military can cooperate.

Is U.S. support for Burma’s democratic transition and its people important? Why?

U.S support for Burma’s democratic transition and its people is important, because Burma has a border with China. Significantly, China is trying influence Burma’s peace process. It is in the United States’ interest to make sure China is not the only voice the Burmese government and people are hearing.

Is U.S. engagement with the countries of Southeast Asia important?  Why? 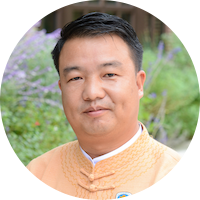 People of Courage by Jieun Pyun

Bush Institute's Jieun Pyun reflects on module two of the Liberty and Leadership program and discusses how the scholars are improving living conditions for people in Burma.

The Bush Institute’s 23 Liberty and Leadership scholars from Burma are spending three weeks in the United States for Module 2 programming.

Learn how the Liberty and Leadership Scholars, together with others in Burma, are forging a path to democracy and peace, bringing diverse communities together through mutual understanding and respect.

Since the launch of the Liberty and Leadership Program, the Bush Institute has engaged 79 men and women from Burma, including former political prisoners, civil society activists, members of parliament, journalists, educators, health practitioners, and other emerging leaders.