Today, the George W. Bush Institute is hosting a conference that will explore the role of monetary policy. The Federal Reserve shapes that policy primarily through controlling the money supply. The Fed does so in numerous ways, including adjusting interest rates it charges member banks of the Federal Reserve System.

The Bush Institute asked Presidents Fisher and Williams to elaborate upon their views of the economy, the effects of monetary policy and the challenge of responding to economic crises. Here is how Williams, who began his career as an economist at the Board of Governors of the Federal Reserve System and who has served as a senior economist for the White House Council of Economic Advisers, responded to our questions: 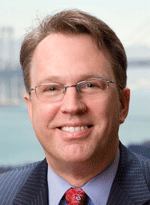 Where do you see the economy making the most improvements?

We’re definitely looking at a brighter jobs market, and employment has seen steady progress over the past few years. We’ve also seen sustained improvement in interest-sensitive sectors, which I see as evidence of the benefits of the highly accommodative stance of monetary policy.  Auto sales are more or less back to where they were before the financial crisis, and while home sales and construction aren’t anywhere near as strong as they were pre-crisis, they are the areas of the economy that have improved most in recent years.

What worries you the most?

One of the things that concern me is the falloff in momentum in the housing rebound.  In recent months it’s stalled, and I’d like to see it turn into more of a tailwind for the recovery overall.

Inflation has also been persistently below our longer-run target, which is something we’re paying close attention to.

If the Fed keeps interest rates low, at what point will it prop up businesses that may otherwise have gone into bankruptcy? The Wall Street Journal recently reported on some law firms closing down their bankruptcy practices because firms were, well, not going into bankruptcy.

It’s not all surprising that in an economic recovery, such as we’re in now, we should have fewer bankruptcies. On the margin, very low interest rates may have helped some people and businesses avoid bankruptcy over the past several years, and I see that as a good thing. But, more importantly, fewer bankruptcies are evidence of ongoing improvements in the household and business sectors. Incomes are rising and people and businesses have been working to improve their balance sheets.

An essay in The Economist looked at five financial crises over the last 200 years. The magazine came to this conclusion:

“Institutions that enhance people’s economic lives, such as central banks, deposit insurance and stock exchanges, are not the products of careful design in calm times, but are cobbled together at the bottom of financial cliffs. Often what starts out as a post-crisis sticking plaster becomes a permanent feature of the system. If history is any guide, decisions taken now will reverberate for decades.”

What is your response to this?

With regard to monetary policy, I think it’s important to view the Fed’s actions of the past several years in the context of extraordinary times calling for extraordinary measures.  I don’t see a fundamental change to the way monetary policy works or to our goals.  The measures we’ve taken mean we now have new, tested weapons in our arsenal to fight the effects of a massive blow to the economic system, especially if short-term interest rates are near zero.  As the recovery progresses, we’ll start to put them away.  We’ll know we can use them again if we need to and we’ll know that they’re effective; but they aren’t likely to be a feature of monetary policy in ordinary times.

To what extent is the lack of action on fiscal reforms, such as modernizing entitlement programs and the tax system, putting greater pressure on monetary policy?

The nation faces significant challenges — there’s widespread agreement that federal fiscal policy is on an unsustainable trajectory, even if Washington lacks consensus on how to address it.  The government has been grappling with those issues, but will need to do so more systematically and with a long-term view.  However, those changes will happen in the future, and therefore don’t really affect our thinking about monetary policy now.

From an economic perspective, the greater issue is the uncertainty that arises from the brinkmanship we’ve seen recently — like the threats of defaulting on the national debt or the government shutdown.  If you look at the debt ceiling standoff in 2011, the fiscal cliff of 2012, and the government shutdown and debt ceiling antagonism of late 2013, you’ll see a corresponding spike in uncertainty that had real economic consequences.  The San Francisco Fed estimates that the rise in policy uncertainty—that’s all policy, not just as relates to the debt ceiling—increased the unemployment rate by as much as 1 ¼ percent as of late 2012.  That translates into nearly 2 million lost jobs.  My hope is that we can avoid these types of events in the future, which should bolster confidence and help speed the recovery.  That would definitely make our jobs easier in managing monetary policy.

The Federal Reserve obviously stepped into the middle of the financial crisis of 2008 and 2009. It took some unprecedented steps to help Americans, but did the Fed lose some of its independence by becoming an active player?

The Fed is able to make what we think are the best policy decisions precisely because of our independence.  We’ve built up a system staffed by highly experienced, non-partisan experts whose objective is to achieve our policy goals and who are driven by a sense of public purpose.  In my view, we haven’t lost any of our ability to act independently in our conduct of monetary policy.

In fact, I don’t think I’ve ever encountered such a state of absolute political neutrality as I have at Federal Open Market Committee meetings.  We just look at data, discuss the latest research and analysis, and make the best decision we can for the health of the economy.

ICYMI: 60 Years after Brown v. Board of Education, segregation is returning to schools Brittney Bain on May 16, 2014