ABOUT THE LEADING CHANGE SERIES

Women in Afghanistan have experienced incredible progress over the last ten years, and the hard-won gains of the last decade must not be reversed. Girls have returned to school to become educated, like their brothers, and women are serving as provincial governors and members of the National Assembly.  Their stories inspire us, and remind us of what is at stake for Afghan women. As part of the Women’s Initiative Afghan Women’s Project, we have launched a blog series that spotlights the success stories of courageous Afghan women and girls.

“though she be but little, she is fierce.”
- Shakespeare, A Midsummer Night’s Dream

If you ever have the chance to meet Anita Haidary, you will meet a young woman determined to take a stand for the life and freedom of young women.  She carries a deep commitment to justice, an obligation to “fight for what is right.”  As a student of film and an organizer of advocates for women’s rights in Afghanistan, Anita is one whose voice will be heard today and well into the future. 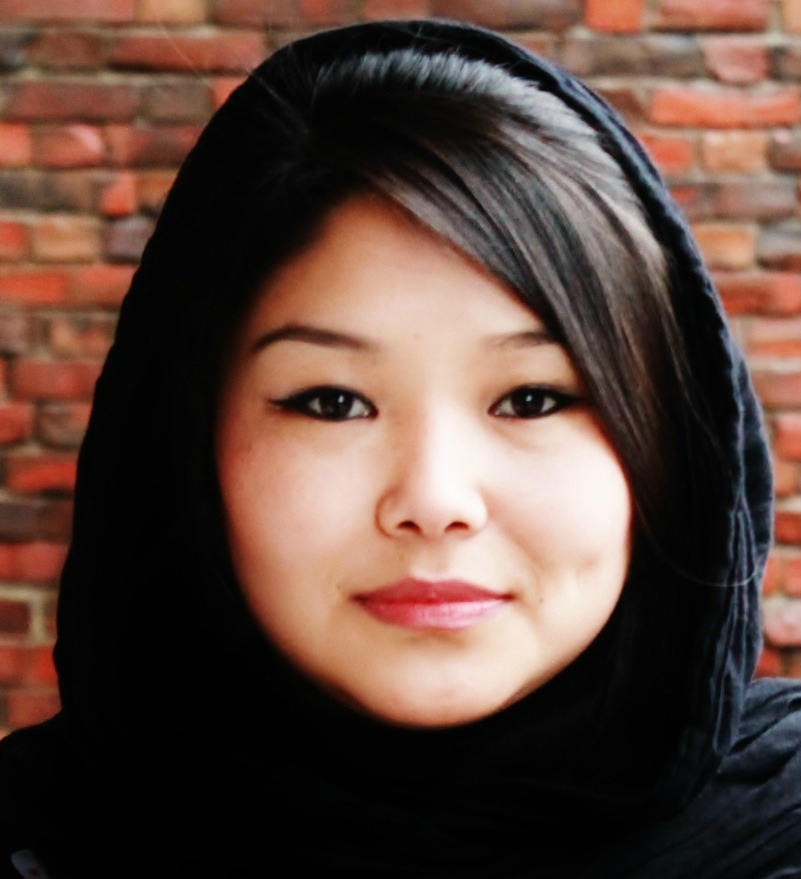 Building on a strong family upbringing, Anita’s dedication to civil society activism flourished during her experience as an exchange student in the U.S. State Department’s FLEX program.  During her junior year of high school, Anita traveled to California to spend a year with a U.S. family and study in a public high school in Elk Grove, California.  Anita found classroom dynamics and student government in the United States both fascinating and empowering.

The Afghan educational system, based on a formal, lecture-based classroom structure, does not always encourage student questions or discussion.  Anita, an outspoken, critical thinker, recounts that she often found herself in trouble for expressing her opinions in class.  “I always had to censor myself,” she says, “I couldn’t speak without getting in trouble.”  While in the United States, she thrived as she engaged in classroom discussions and actively sought the help and advice of her teachers and fellow students.

Her exposure to student government also profoundly impacted Anita and continues to influence her current work and future goals.  As she participated in student-led community service projects and governance forums, she learned that students can be important and active participants in their schools and communities.  “In Afghanistan, everyone thinks you have to be the president of the country to do anything.  If you aren’t the president, the thought is that you can’t do anything.”  As she returned to Afghanistan for her senior year of high school, she brought with her these experiences and a sense of responsibility to engage her fellow Afghan students in community discussions and projects. 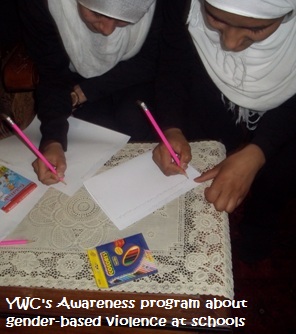 Anita is proud of the fact that she has developed personal values that govern her decisions, actions and pursuits.  A simple, but profound conviction guides her: change comes through normal people who, when faced with a problem in their community or country, decide to respond and do something.

Anita applied what she learned about student organizing and coupled it with her work experience as a trainer and workshop leader for NGOs in Afghanistan.  Together with a close friend, she co-launched an initiative now called Young Women for Change (YWC).  Anita stresses that YWC began as an informal group that simply sought to provide space for young women to discuss the various challenges facing them as they live, study and work in Afghanistan.  In YWC’s first meeting, organized through Facebook and other social media, 75 women gathered.

Anita recalls that the main topic of their first discussion was the sexual harassment that young women experience in the streets and public areas of their cities.  “Women who are active in [Afghanistan’s] bigger cities face huge amounts of harassment every day, whether they are going to school, going to market, or going to visit family.  Whenever a woman does anything outside of the house, she faces all sorts of harassment – touching, pulling her head covering, making comments about her body.”  Out of concern for their safety, women travel in groups, often waiting long periods for family members or friends to accompany them.  Some girls give up going to school and other young women their work in order to avoid harassment on the streets. 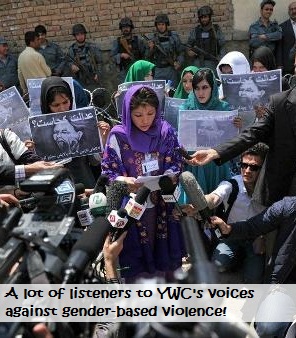 Anita and her colleagues decided to begin YWC’s work with a public demonstration and public awareness campaign to combat street harassment.   YWC’s female members, together with male advocates, took to the streets of Kabul in Afghanistan’s first anti-harrassment march.  They sought to challenge accepted social behaviors that threaten women’s safety and self-esteem.  “It is important that men understand that if you call someone a name on the street, it might not affect them, but it affects the person receiving it and it affects our country as a whole.”

Anita explains that many defend their behavior and instead blame women.  “It is considered a woman’s problem when she is harassed – her clothes were short or she wasn’t wearing her scarf properly or she walked in a certain way.”  The real problem, Anita argues, is the fact that there is still very low tolerance among men to see women in open public places, even in Afghanistan’s major cities.

Her goal is to change culture from the bottom up.  “A culture is being transferred to the younger generation.  We are trying to finish problems [violations of women’s rights], but sometimes we are unaware of the fact that attitudes and behaviors are automatically being transferred to the younger generation.”  In order to educate young men and engage them in their work, YWC produced a documentary film This is My City Too, which they showed in community centers and schools.

Anita’s outspoken promotion of women’s rights has garnered attention, both positive and negative.  “Sometimes people say that I take it to the extreme.  It is true; sometimes I do take it to the extreme!  But I also believe that in extreme situations like what women face in Afghanistan that there has to be an extreme reaction.”  Under Anita’s leadership, YWC seeks to grow a grassroots feminist movement in Afghanistan that will empower Afghan women to confront the challenges that face them in their families, community and country.

Anita Haidary is a senior at Mt. Holyoke College in South Hadley, Massachusetts.  She is a student scholar of the Initiative to Educate Afghan Women.

While there have been tremendous gains in Afghanistan, lack of security threatens these gains daily.

Dr. Nilofar Ibrahimi is a member of the national assembly of Afghanistan. She represents Badakhshan province in the Wolesi Jirga (house of representatives). Her story is one of survival, pursuit of dreams, and dedication to women’s well-being and health. Here, Dr. Ibrahimi shares her thoughts on the current state of Afghan women’s empowerment, the challenges women face in achieving equal rights, and the impact women have on the country’s long-term peace, security, and prosperity.

In Case You Missed It: The Breadwinner, an Animated Film About the Strength and Resilience of Afghan Women and Girls, Premieres in the U.S. by Farhat Popal

Executive producer Angelina Jolie tells the story of Parvana, an 11-year-old girl growing up under the Taliban in Afghanistan in 2001.

A Voice of Hope by Ioanna Papas

In 2002, the Taliban were removed from power, international organizations were moving into Afghanistan, and 16-year-old Manizha Wafeq wanted to work.