Do Budget Cuts Hurt the Environment?

The Environmental Protection Agency has once again become the target of spending cuts in Washington. A plan by House Republicans to significantly reduce funding for the agency has drawn criticism from House Democrats concerned about environmental protection. But what effect does the EPA’s budget have on environmental quality? Do increased EPA budgets result in direct improvements in environment quality, or does it unnecessarily increase the size and scope of the agency? 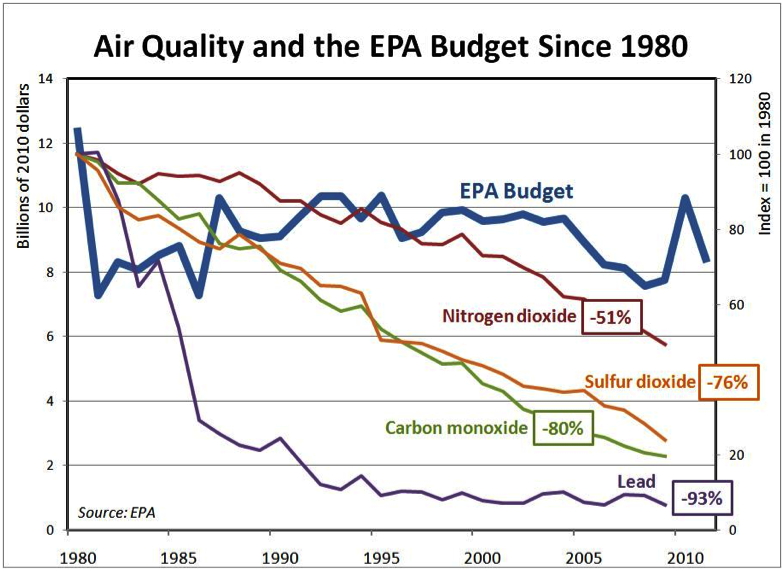 Consider the figure above, which shows that since 1980, the EPA’s budget (adjusted for inflation) has remained relatively flat, yet air quality has continually improved. Ambient concentrations of nitrogen dioxide have declined by 51%, sulfur dioxide by 76%, carbon monoxide by 80%, and lead by 93% (data here). As Joel Schwartz described recently in PERC Reports, fine particulate levels have also declined by 42% and peak ozone levels have fallen 30%. Such data suggest that increasing the EPA's budget, as the Administration has proposed, will increase bureaucracy but not necessarily air quality.

The EPA sets national air quality standards, so the agency decides when its own job is finished. Despite such improvements, the EPA has never declared the air safe and continues to push for more funding, more employees, and more regulations. The EPA is just one of many examples of where cutting budgets can reduce spending and bureaucracy without reducing environmental quality.

Terry Anderson is the president of the Property and Environment Research Center (PERC), a nonprofit institute dedicating to improving environmental quality through property rights and markets. Shawn Regan is a research fellow at PERC.

Do Budget Cuts Hurt the Environment?