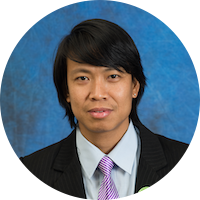 Ye Win is a cofounder of the I-School Myanmar, which advocates for transparency and accountability during Burma's democratic transition. He conducts trainings on civic education, information and communication technology, and citizen journalism for social and political activists. In 2013, he was invited by the U.S. and Malaysian governments to attend the Global Start-Up Youth Camp and Global Entrepreneurship Summit as Burma's representative.

As an advocate for national education reform in Burma, Ye win serves on the National Network for Education Reform (NNER). In 2012, he worked with other educators to draft a new policy for education reform and to advocate for the New National Education Act. As a person with disabilities, Ye Win also advocates for policies to advance the rights of disabled people, who suffer widespread discrimination and marginalization from mainstream society.

Ye Win graduated from university in 2004 and founded a private engineering school. In 2007, he participated in the Saffron Revolution and, following his arrest, was held as a political prisoner for two years. After his released in 2010, Ye Win cofounded the Myanmar Youth Network, which sponsors youth activities and development.