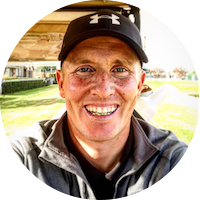 Sergeant Timothy Gaestel join the United States Army in August 2001 and was set to leave for Basic Training on September 11, 2001.  Due to the attack on our country, those plans were delayed for a week.  Gaestel was later stationed at Fort Bragg and for four years he served with the 82nd Airborne Division.  Gaestel witnessed combat in both Afghanistan and Iraq.

In 2003, while driving through a dangerous area south of Baghdad, a roadside bomb exploded as Gaestel’s Humvee was passing.  Two pieces of shrapnel went through his lower individual body armor and into his back.  Gaestel remained in Iraq for eight months, and in April 2004, he returned from deployment.  He received the Purple Heart for his injuries during that attack.

Gaestel was accepted to Texas State University in 2008 and he credits golf with pulling him out of a dark place in his life.  He graduated in May 2011 and moved to San Angelo, Texas to work for Bentwood Country Club as head coach of the junior high school golf program.  Previously, Gaestel was an assistant golf coach and teacher of U.S. History at Central High School and during the fall of 2015 accepted a Head Golf Coach job in Cedar Park, Texas at Vista Ridge High School.

Gaestel was selected to play in the Warrior Open in 2013 and 2015 and participated in the Alumni event in 2017.  This gave Gaestel some amazing opportunities.  First, he credits this network for helping with finding work as an assistant golf coach and now the Head Golf Coach at a 6A High School.  Golf saved his life and being a member of Team 43 has truly been an honor for him.

While attending the Portraits of Courage exhibit at the Bush Library In May 2017, Gaestel saw the portrait that President Bush painted of him and how accurately he was depicted.  He decided it was time to lose some weight.  He lost 80 pounds that year and is back to his weight before his injury.

Gaestel is very lucky to have married his biggest supporter, Adria, and knows he would not have made it without her love and support.