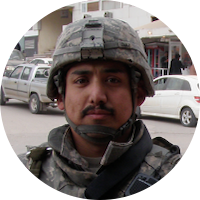 Staff Sergeant Victor Diaz joined the Army Reserve in 2002 after the Terrorist Attacks that occurred on 9/11 inspired him to serve his country.  Diaz held the MOS of Military Police and in 2005 was trained at Ft. Leonard Wood where he earned the ASI of V5, Military Police Investigator.

Diaz deployed several times, including missions in El Salvador and a deployment to Iraq in 2008. During that deployment, the HMMVW Diaz was riding in was struck by an Improvised Explosive Device (IED). Approximately three weeks later, Diaz vehicle was struck with another IED. In 2012, he deployed to Afghanistan, where his Forward Operating Base (FOB) Shank in Logar Province sustained approximately 212 indirect fire attacks.

For his actions, he was awarded the Bronze Star Medal and other medals and accommodations.  Diaz left the Army Reserve in 2013.  Subsequently, from the various deployments, Diaz was diagnosed with Post-Traumatic Stress (PTS).

As a civilian, he serves as a Detective for the Richardson Police Department, and serves as a SWAT team member and Defensive Tactics Instructor.

Diaz began trail riding years ago and enjoys off-road cycling.  On February 7, 2018 fellow Richardson PD Officer and SWAT team member David Sherrard was killed in the Line of Duty.  In May of 2019 Diaz participated in the Law Enforcement United “Road to Hope,” a three-day, 250-mile bike ride from Chesapeake, VA. to Washington D.C. for National Police week.

Diaz is married to Elizabeth, and they have three children, Victor Manuel, Ethan Gabriel, and Isabel Brianna.