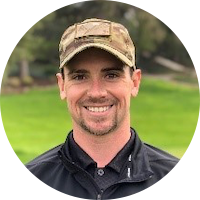 Corporal Robert “Bobby” McLean is a veteran of the U.S. Army.  He enlisted his senior year of high school.  For the duration of his enlistment, he served with 1st Battalion, 75th Ranger Regiment.

During his time as a Special Operations Airborne Ranger, McLean primarily served as an Automatic Rifleman for a joint task force specializing in direct action raids.  He deployed multiple times to Iraq and Afghanistan.  He spent time during his last deployment training members of the Afghan National Army.

In 2010, while testing the new T-11 parachutes being adopted by the Army at Ft. Stewart, GA, McLean suffered severe injuries.  He caught the static line of another Ranger and endured a full tear of his bicep, latissimus dorsi, ligament in his shoulder, and fractured his back on the landing.  Wartime post-traumatic stress (PTS) led to alcoholism and substance abuse, which became prevalent during his injury recovery.

Following his honorable discharge in 2012, McLean returned to California and struggled to transition to civilian life.  He had a difficult time coping with physical pain, alcohol, and drug abuse, and severe PTS.  With the unconditional love of his family, VA programs, and support from his community, McLean will celebrate six years of sobriety in June 2019 and has utilized the Post 9/11 GI Bill to earn a college degree.  Mindfulness and meditation led him to golf, which he says strengthens his mental fortitude, allowing him to walk proudly like an Infantryman.

McLean earned his bachelor’s degree in Science, Technology, and Society in 2018 and is currently pursuing his master’s degree in Sustainability Science and Practice with an expected graduation date of 2020, both from Stanford University.

McLean’s aspiration is to work in technology or public service, finding a way to help others and impact society.

Currently, McLean resides in Los Gatos, CA.  He enjoys hiking, reading, volunteering at the VA and talking to people dealing with substance abuse and PTS.