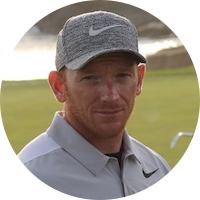 Sergeant First Class Kevin Trzcinski joined the U.S. Army in 2010 as an 18X-Special Forces Recruit.  In 2013, he graduated from the Special Forces Qualification Course and was assigned to 7th Special Forces Group (Airborne) at Eglin AFB, FL where he served as a Special Forces Medic.  During that assignment, Trzcinski deployed to Afghanistan, and Central and South America.

In 2014, while deployed in southern Afghanistan, Trzcinski was wounded during a dismounted patrol.  A sniper’s round narrowly missed his body armor, entered his chest cavity and caused severe internal damage.  Trzcinski was medically evacuated to the Kandahar Hospital and underwent emergency surgery.  After a month in the hospital, two additional surgeries, and almost a year of recovery, Trzcinski returned to full duty.

Due to the severity of his wounds and the residual shrapnel injuries, Trzcinski was unable to perform many physical activities.  While in recovery at Ft. Bragg, he fell in love with the game of golf.  Prior to being injured, golf was just a pastime, but after his injury, the game became so much more.  Trzcinski continues to work on his game and passionately follows the sport.

Trzcinski earned his Associates Degree in General Education from Fayetteville Technical Community College in Fayetteville, NC.  He is presently working towards his Bachelor of Science in Finance from Pennsylvania State University where he is a member of Sigma Alpha Pi-National Honor Society.

Currently, Trzcinski is serving as an instructor at the Special Forces Underwater Operations School in Key West, FL.  He has been married to his wife, Kathlene, for seven years.  They have two dogs, Rusty and Lucy, and are expecting their first child, a baby boy, in late June 2019.