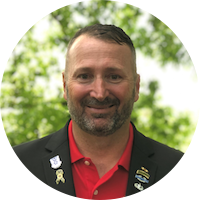 Command Sergeant Major David Dougherty, USA, Ret. joined the U.S. Army in 1991.  Over his 25 years of service, he served in numerous leadership positions, and in many stateside and overseas assignments.

Dougherty has deployed over a total of 36 months, including deployments in support of Operation Enduring Freedom and Operation Iraqi Freedom.  Due to combat action and other events while in-country, Dougherty has symptoms of post-traumatic stress (PTS).  He Ret. in 2016 with many awards and medals.

After retirement, Dougherty works for the Military Warriors Support Foundation as the Director of Skills4Life and Program Advancement. The organization’s mission is to provide support and programs that facilitate a smooth and successful transition for our nation’s combat wounded heroes and Gold Star families. The programs focus on housing and home ownership, recreational activities and transportation assistance. Through these programs, Military Warriors Support Foundation awards mortgage-free homes, payment-free vehicles and provides outdoor activities to combat wounded heroes and Gold Star spouses. In addition to the home or vehicle, the families also receive family and financial mentoring.

Dougherty has been married to his best friend, Kristy, for 24 years.  They have four children, Brian, Dylan, Nicolas and Ashley.  They have made San Antonio, TX their home.