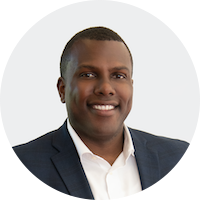 D’Juan Wilcher is a Surface Warfare Officer and has served in both active duty and reserve capacities since 2010. During his time in service, he has had three deployments in support of Operation Enduring Freedom. In 2015, D’Juan was assigned to Recruit Training Command in North Chicago and served as Group Commander and Ceremonial Officer. His most recent active-duty assignment was an Officer Recruiter where he worked to increase candidate diversity for selection as Naval Officers.

D'Juan also served as Regional Director for Travis Manion Foundation for 4 years. He was able to build brand awareness, create development pipelines, recruit veterans to serve as mentors, and partner with youth organizations to execute on the TMF mission.

D’Juan joined Associated Bank as Senior Vice President, Director of Diversity, Equity & Inclusion (DE&I). He was responsible for the development and implementation of policies, programs and initiatives that foster an intentional culture of inclusion, belonging and equal opportunity for underrepresented groups.

D’Juan is originally from Gary, Indiana and is a graduate of Indiana University – Bloomington. He earned his MBA from The University of California – Berkeley, Haas School of Business in 2022. In 2018 he was inducted into the Truman National Security Project Defense Council and is also a 2021 inductee of The Council on Foreign Relations. In his personal time, D’Juan is a community volunteer with various non-profit organizations and prioritizes spending time with his wife and 2 sons.