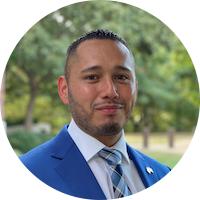 Christopher Vidaurre was born and raised in Lubbock, Texas and enlisted into the Marines Corps on Sept. 11th, 2006. He served nearly 12 years in both the active-duty and reserve components.

He deployed in support of Operation Iraqi Freedom in 2008, and in April of 2009 deployed to Afghanistan in support of Operation Enduring Freedom. After discharging from active-duty in 2011, Christopher was mobilized in 2012 to the Wounded Warrior Battalion East - San Antonio Military Medical Center. He then mobilized in 2014 to Wounded Warrior Battalion East - Walter Reed National Military Medical Center, in Bethesda, Maryland.

Christopher has continued to serve service members and veterans and their families as the Outreach and Life Skills Coordinator at the Steven A. Cohen Military Family Clinic at Endeavors, and later became the Outreach Director, where he ensured they were well taken care of while advocating for the services and treatment they deserve.

Christopher has two daughters. He holds a Bachelor of Science in Management Studies, and Master of Business Administration. Christopher’s hobbies include photography, videography, and any type of recreational outdoor event.