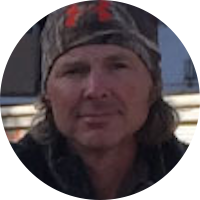 Master Sergeant Sean Bennett was a member of the 4th Brigade Combat Team (Airborne) 25th Infantry Division.  Between 2006 and 2007, he deployed twice to Iraq in support of Operation Iraqi Freedom.  On January 20, 2007, while in Karbala, Bennett was struck by a bullet in the left arm.  In 2010, Bennett medically retired from the Army.

For his service, Bennett is the recipient of many honors, including the Silver Star, Bronze Star, Purple Heart, MSM, Airborne, Pathfinder, Air Assault, Combat Action Badge, and Drill Sergeant Medallion.  His grandfather also received the Silver Star in WWII making their family one of the few to hold this honor generationally.

Following his retirement, Bennett attended the University of Alaska and graduated with a degree in outdoor education.  After graduating, he was hired to start the Wounded Warrior Project in Alaska.  As the State Manager, he led four staff, 1,400 alumni, and enjoyed numerous accomplishments for WWP in his three year tenure.

Bennett currently performs music with fellow veteran Matt Williams.  Together they have performed at many venues which include; Fenway Park, Boston Symphony Met and for Team 43 in Dallas, TX.  Bennett believes Team 43 has been and will continue to be instrumental in mentoring him and providing tools when required for him to excel.

Currently, Bennett and his wife, Monica, live in Seymour TN.  Monica is also a veteran and retired from the Army after 22 years.  They have two beautiful daughters, Makenzee and Sharleigh, both attending college.  Bennett and Monica have one grandson, Kaden.