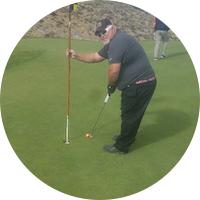 Sergeant First Class Scott Adams joined the Army at age 17.  He served for eight years with two tours in Germany.  After an 11-month break in service, he returned to serve in the Army Guard Reserve program.  Adams served in four different units including; Signal, Transportation, Psychological Operations (Airborne), and Military Police and deployed five times.

On January 26, 2007, while conducting a combat patrol outside Bayji, Iraq, Adams was injured by two anti-tank mines laced with white phosphorus.  He sustained third and fourth-degree burns over 53 percent of his body and 92 percent total body surface burns.  Adam’s fractured his C5 in his neck, a broken back with 8 compound back fractures, five bulging disks, and spinal cord damage.  His lungs were 30 percent scared due to smoke and fire, he had nerve damage to both legs and suffered a fourth blood clot in his right leg.

Adams received treatment at the Brooke Army Medical Center burn ward, Center for The Intrepid, and underwent many surgeries over 18 months. He had to learn how to walk four different times since his injury.  His burn scars and back injuries continue to limit his range of motion every day.  On Thanksgiving Day 2008, Adams was retired due to his injuries bringing a 22 year four month, and four day career to an end.  He continues to receive medical care at the Minneapolis VA in Minneapolis, Minnesota.

Team 43 has given Adams the missing pieces that servicemen and women lose when no longer serving; purpose, mission, comradery and support. Team 43 has motivated him and allowed Adams to grow and find his “new normal” by sharing these experiences with his fellow Team 43 veterans.

Adams serves on the Steering Committees for Minnesotans’ Military Appreciation Fund (MMAF), Tee It Up For the Troops, Golf Mentor (Military Warrior Support Foundation), and he continues to work towards improving his golf game.

Adams wife, Susie, is his best friend and caregiver who’s been by side for almost 30 years.  The support of Susie and their three sons, Scott Jr., Dustin, Zachary and grandson, Devin, proves that military families deserve all the credit and praise.