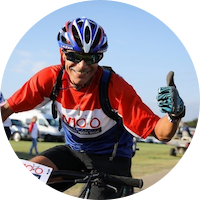 Master Sergeant Roque Rodriguez-Urena joined the United States Air Force in October 1983 and served his entire career as a medic.  He was stationed at bases around the world, including: Japan; Omaha; Nebraska; England; and Altus, Oklahoma.

In 1991, Rodriguez-Urena deployed to Germany in support of the Persian Gulf War and was stationed at an Air Force-operated medical facility, taking care of wounded patients during the Kuwait invasion.  He later deployed to Iraq from August 2004 - February 2005 as a shift leader in the Emergency Room at the 332nd Expeditionary Medical Group, where he treated thousands of U.S. Soldiers, civilians, Iraqi nationals and insurgents.

The overwhelming amount of trauma treated and seen throughout his career deeply impacted Rodriguez-Urena emotions.  With the help of VA hospital counselors, he has learned to open up about his experiences and how to cope with post-traumatic stress (PTS).

After 25 years of service, Rodriguez-Urena retired in 2008 and moved to Summerville, South Carolina.  He and his wife, Marlene, have enjoyed 33 years of marriage and have a daughter, Alyssa.

Rodriguez-Urena completed a two-year program at a local community college as a Computer Network Technician.  He keeps himself physically and mentally busy by staying active and participating in numerous sports, including mountain biking, tennis and running.  Rodriguez-Urena continues to officiate USVA and NCAA Women's Volleyball and he rode in the Bush Institute’s W100K in 2013 and in 2014.