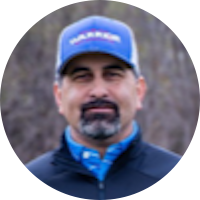 Captain Roger Benimoff enlisted in the U.S. Army in 1991, serving for 17 years.   After completing his enlistment, Benimoff joined the Texas Army National Guard and attended Texas State University.  Before completing his bachelor’s degree in Criminal Justice, he sensed a call to ministry, so Benimoff attended Southwestern Baptist Seminary in Fort Worth.

While in the National Guard, Benimoff became an Army Chaplain.  In 2003, he returned to active duty.  He deployed to Iraq as a Chaplain three times before the end of 2006.  He was in a high stress environment, conducting memorial ceremonies for his fallen soldiers, crisis counseling, and he had his own fear of being in constant danger and being shot.  He was emotionally spent, with very little time between deployments.

Combat operations concluded in early 2006.  Benimoff was conducting a re-integration program at Walter Reed Army Medical Center in Washington, DC.  During this time, he was suffering from nightmares and flashbacks, he wasn't sleeping or eating, and he was always on high alert.  To cope, Benimoff began long-distance running, but was emotionally detached from his family.  Benimoff was diagnosed with chronic Post Traumatic Stress (PTS).  In 2009, he was medically retired from the Army.

Benimoff still lives with symptoms of PTS and seeks treatment.  Along with therapy, he loves to challenge himself through writing, physical activity, and volunteering.  Benimoff was fortunate enough to share part of his story with Newsweek Magazine which led to the writing of his book, Faith Under Fire; An Army Chaplain's Memoir.  To challenge himself physically, he recently completed the Camino De Santiago, a 550-mile backpacking trip through Spain.

Benimoff is married to Rebekah, and they have two boys, Tyler and Blaine. They reside in Grand Prairie, Texas.