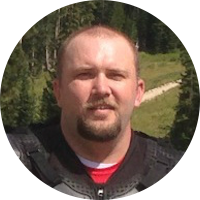 Robert Leonard grew up in Roswell, New Mexico, where he met his wife, Lacey Bertram. Robert's grandfather, father, uncles and most of his cousins served in the Armed Forces. In March 2003 he joined the Army as a 19D Cavalry Scout.

In August 2006, he arrived in Fort Knox, Kentucky for training. He graduated OSUT with the honor of Excellence in Cavalry in December 2003. He was assigned to A-troop, 3rd Squadron 7th U.S. Cavalry Regiment in Fort Stewart, Georgia. On January 20, 2005, the unit was deployed to Iraq to conduct combat operations in support of Operation Iraqi Freedom 3. Almost a month later, on February 15, 2005, Lacey gave birth to their first child, a daughter. In April of 2005, he took mid-tour leave and met his daughter Kamryn for the first time. After returning to Iraq, on November 10,2005, his Bradley Fighting Vehicle hit a roadside bomb which resulted in the amputation of his right leg below the knee. He was sent to Germany and then to BAMC in San Antonio. After arriving in San Antonio, President Bush visited the hospital and awarded Sergeant Leonard his Purple Heart Medal. After nearly a year and a half of recovery and over a dozen surgeries, he medically retired from the Army in February 2007.

Sergeant Leonard, Lacey, their daughter Kamryn, and their son Wyatt, currently live in Sugar Land, Texas. He now builds custom furniture from his wood shop at home. Before his injury, he was very active in mountain biking. After his injury, he did not get on a bike again until his daughter Kamryn motivated him to start riding again with her. He now rides most days of the week and due to this activity, he has lost nearly 40 lbs. Robert is currently training for the Leadville 100 and plans on competing in 2014.