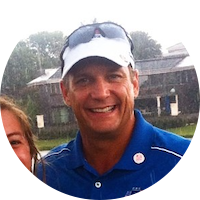 Sergeant First Class Randy Nantz was born in Orange, Texas, and enlisted in the United States Army after the 9/11 attacks. He completed basic training at Fort Benning and reported to the 3rd Infantry Division at Fort Stewart. In January 2003, he deployed to Kuwait to prepare for the Iraq invasion. He then went to Special Forces Assessment Selection, Special Forces Qualification Course and successfully graduated as a Communications Sergeant.

Sergeant First Class Nantz reported to the 5th Special Forces Group (Airborne) and deployed to Iraq in August 2006. On December 22, 2006, his vehicle was hit by an EFP. He sustained third degree burns, large muscle tissue loss, and severe nerve damage, which led to a lower left leg amputation. Once released from rehabilitation, he was assigned to the USSOCOM Care Coalition for all Special Operation Forces components.

He began playing golf with his grandmother at the age of three and played competitively in high school. Sergeant First Class Nantz formerly worked as the programs and services director of the Green Beret Foundation in Tampa, Florida. He resides in Keller, Texas and has two children, Ashley and Joshua.