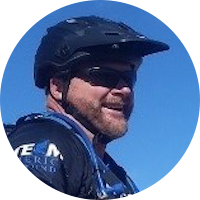 Major Peter Way grew up in Savannah, Georgia and graduated from the University of Georgia in 1989.  He completed the Army ROTC program and was commissioned as a Second Lieutenant in the United States Army.  Way returned to school and completed a Master’s degree in Nursing in 1997.   He was recomissioned in the Army under the Medical Corps.

In 2002 and 2003, Way deployed to Afghanistan and served as medic.  Initially, he was injured by a grenade and a second time while pulling a wounded soldier out of a vehicle.  Way was medically retired in 2013 after 24 years of service.  In August 2014, his injured leg became infected and he made the decision to have his leg amputated above the knee.

While recovering, Way was introduced to adaptive sports as part of his rehabilitation process.  He now enjoys hand-cycling, wheelchair basketball, archery, rowing, and shooting and won multiple medals at the Valor games in 2015, 2016, and 2017.  Way participated in the Warrior 100k in 2016 and 2017.  He has participated in the U.S. Paralympic Nordic Program as well as Team Semper Fi.  Way is an adaptive athlete and Military Veteran Ambassador for Haibike USA.

Way volunteers as a board member for the America’s VetDogs, an organization that places service dogs with veterans.  As a recipient of a service dog, he is a service dog advocate and helps other veterans apply for service dogs.  Way is also a volunteer for Central Georgia K9 Search and Rescue as a search dog handler and Wilderness Air Scent Dog Trainer.  He is an active member of Team RWB and has recently begun as a volunteer for Team Rubicon.  He also works with the Congressionally Directed Military Research Program as a consumer reviewer, providing insight into the validity of Army funded research proposals.

Currently, Way lives in Martinez, GA, with his wife and two dogs.  His son, Joe, attends the United States Air Force Academy and his daughter, Lara, will begin dental school in 2018.