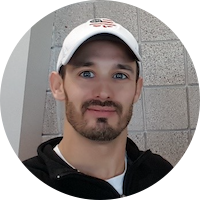 Sergeant Peter Richert, U.S. Army, Ret. enlisted in the Kansas Army National Guard in August 2001, prior to his senior year in high school.  With a scholarship offer to college for track and cross country, Richert served his country while going to college and competing in sports.  He transitioned to active duty following graduation.

On February 22, 2007 during his deployment to Iraq, Richert’s squad was sent to respond to mortar rounds being shot at the military facility, CSC Scania.  In route, his Humvee struck two arrays of explosively formed penetrators, which severed his right leg and severely wounded his left.  Richert spent a month at Walter Reed National Military Medical Center..  In late March 2007, Richert was transferred to Brooke Army Medical Center in San Antonio, TX, where he received his outpatient care.

On January 26, 2008, Richert was medically Ret. from the military.  Since retirement, he has been a stay-at-home dad, which has allowed him to tend to his oldest daughter, Lindsey’s, medical needs.  In 2014, Lindsey started dialysis due to renal failure.  In November 2015, she received a new kidney from her mother.  Both mom and daughter have been doing well since.

Richert currently works at the Robert Dole Veteran’s Hospital in Wichita, KS as the Purchasing Agent in the prosthetics department.  He is married to Krista, and they have three children, Lindsey, daughter Riley, and son Micah.  The family resides in Hillsboro, KS.