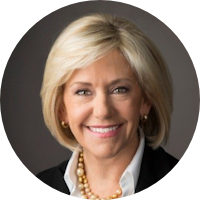 Pamela H. Patsley recently retired from serving as Executive Chairman of MoneyGram International, Inc. from 2016 - 2018. She was chairman and chief executive officer from 2009 - 2015. MoneyGram is a leading global remittance company that operates in over 200 countries and provides essential financial services to consumers.

Patsley is an experienced executive in the financial services industry. After leaving KPMG in 1985, she was chief financial officer of First USA, Inc., where she played a key role in the 1989 leveraged buy-out and the company’s IPO in 1992. Patsley then became president and CEO of Paymentech, Inc., a subsidiary of First USA, and led Paymentech’s IPO in 1996. After Paymentech was acquired by First Data Corporation (FDC) in 1999, she held responsibility for FDC’s $3 billion revenue merchant processing business until 2002.  Following this position, she led FDC’s global expansion as president of First Data International until 2007 and was based for two years in Paris, France.

Patsley serves on the boards of Texas Instruments Inc., Dr Pepper Snapple Group Inc., and Hilton Grand Vacations Inc. From 1996 through 2009, she served on the board of Molson Coors Brewing Company.

She is a trustee of the Boys & Girls Clubs of America Southwest Region.

Patsley holds a BSBA in Accounting from the University of Missouri.

She resides in Dallas, Texas, with her husband, Gary Patsley.