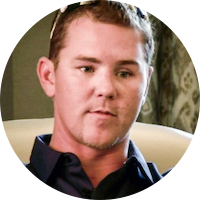 Staff Sergeant Nick Bradley deployed to Balad AB, Iraq, where he served with the 332nd Expeditionary Security Forces.  He flew more than 200 Surveillance Missions for troops outside the wire.  Bradley returned to the US and completed several training courses over the next few years.

In April 2008, Bradley deployed to Camp Eggers, Kabul, Afghanistan, where he served on a Personal Security Detail for five General Officers.  He conducted numerous Protective Missions outside the wire, including Motorcade Operations, Fly Away Missions and Advance Team Missions.  On August 3, 2008, while on a Protective Services Mission, he was injured when his vehicle was struck by 20 pounds of anti-tank mine IED.

Bradley was medically retired from active duty on May 29, 2009.  He has had 16 surgeries and continues to attend occupational and physical therapy.  For his service, he has been awarded numerous honors, including Airman of the Year and the Purple Heart.

Bradley graduated from the University of North Texas with a degree in political science.  He had the opportunity to be a contestant on Fox’s reality show “Home Free” Season Two.  Bradley was fortunate enough to win a mortgage free custom-made built home for the man that played a vital role in saving his life on and off of the battle field, SMSgt Garrett Knight.  In his spare time, he plays on the national Wounded Warrior Amputee Softball team.

Bradley is married to Lindsey and they have two daughters, Khaila, Adalyne Grace.